'We need to make efforts to rid our homes, offices, and workplaces of single-use plastic by 2nd October, 2019,' PM said. 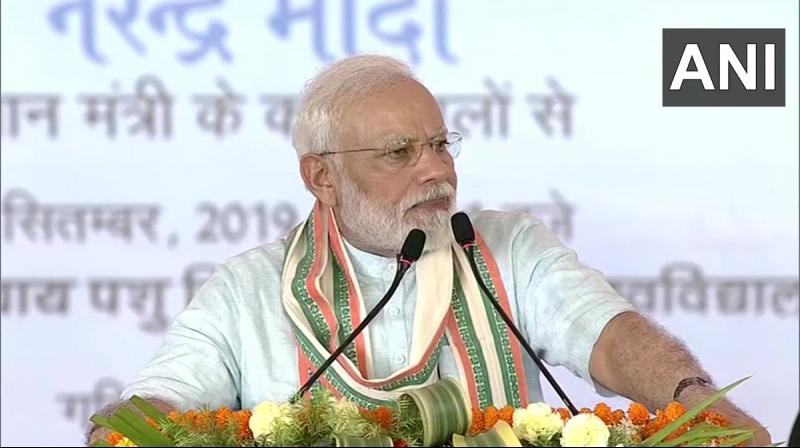 'Today terrorism has become an ideology, which is not bound by national boundaries,' PM Modi said in Mathura. (Photo: ANI)

Addressing the issue of single-use plastics in India, PM Modi said, "We need to make efforts to rid our homes, offices, and workplaces of single-use plastic by 2nd October, 2019. I appeal to self help groups, civil society, individuals and others to join this mission."

Talking about the date's significance, when in 2001, the United States witnessed the tragic terrorist attack he said, "A century ago, Swami Vivekananda gave his historic speech at Chicago about world peace on 11th September. Unfortunately, the same day also witnessed 9/11 terrorist attack in US that shook the world."

PM Modi also said, "Iss desh ka durbhagya hai ki kuchh logo ke kaan par agar 'om' aur 'gaaye' shabd padhta hai to unke baal khade ho jate hain, unko lagta hai desh 16th shatabdi mein chala gaya, aisa gyaan, desh barbaad karne walo ne desh barbaad karne mein kuchh nahi chhoda hai." ("It is unfortunate for this nation that when some people heard the words 'om' and 'gaaye', they immediately become concerned and think that the country is heading back to the 16th century. Ideas like this are brought about by people who want to destroy the country, and they have left no stone unturned to do it.")

PM continued speaking on terrorism and said, today terrorism has become an ideology, which is not bound by national boundaries. This is a global problem. This has become a global threat whose deep roots are flourishing in our neighbourhood.

Talking about CM Yogi Adityanath's efforts to control diseses, PM said, "Yogi Adityanath fought all his life against Encephalitis and brought it to the attention of Parliament and country. However, few vested interest groups blamed his govt for deaths of children due to it but Yogi ji's spirit was not and he continued his work."