This comes after Sena was invited by Maharashtra Governor on Sunday to indicate its 'willingness and ability to form government'. 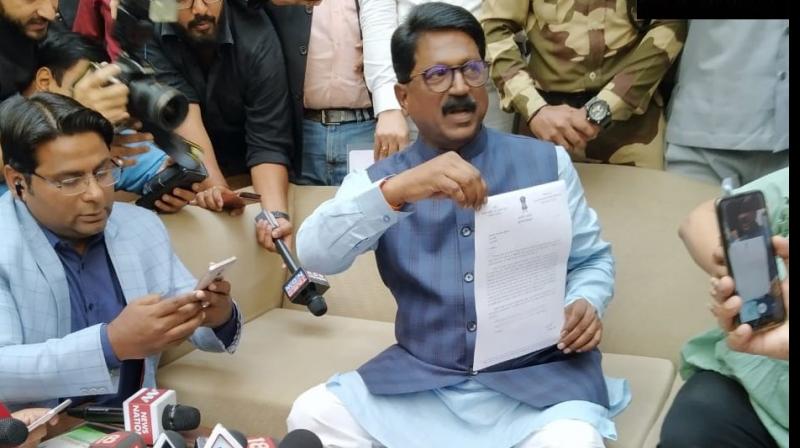 After tendering his resignation as Union Minister, Shiv Sena MP Arvind Sawant blamed its ally Bharatiya Janata Party (BJP) for not keeping its promise on the 50:50 formula. (Photo: Twitter/ ANI)

Mumbai: After tendering his resignation as Union Minister, Shiv Sena MP Arvind Sawant blamed its ally Bharatiya Janata Party (BJP) for not keeping its promise on the 50:50 formula. He also said that there is no trust left and it would not be proper to continue as minister when a new government is being formed in Maharashtra.

“Earlier, BJP had agreed with Sena to equal division of seats and power, but it has now rejected on the same. Hence, a new government is now being formed in Maharashtra,” said Sena leader Arvind Sawant while talking to reporters here.

Addressing a press conference, Sawant accused the BJP of reneging on its promise to the Sena for equal division of seats and power and forcing the Uddhav Thackeray-led party to snap ties. He alleged that the BJP was resorting to "lies" by denying the agreement reached between the leaders of the two allies before the assembly elections.

"They have also hurt my party by lying. Since there is no trust left, I have decided to resign," Sawant told reporters. He also accused the BJP of hurting the sentiments of the Shiv Sena and of the Thackeray family. "I have resigned as Union minister. I have sent my resignation to Prime Minister Narendra Modi," the Shiv Sena leader said and displayed his letter resigning as Heavy Industries minister.

When asked if the Sena has snapped its ties with the BJP, he said, "When I have resigned, you can understand what it means."

Sawant also said a new government was in the process of being formed in Maharashtra and it was not proper for him to remain in the Union cabinet and hence he was resigning.

"In such an atmosphere, it is not proper on my part and for the sake of morality to continue as minister in the Union government," he said.

However, this comes after the Shiv Sena was invited by Maharashtra Governor Bhagat Singh Koshyari on Sunday to indicate its "willingness and ability to form government" in the state after the BJP said it would not stake claim to power.