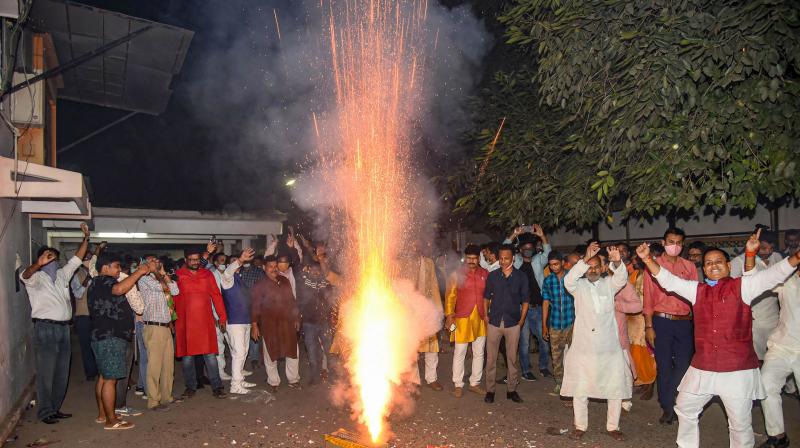 Patna: Surmounting anti-incumbency of 15 years, a mutinous former ally, and a spirited challenge from a resurgent opposition that rose from its ashes like proverbial phoenix after the 2019 Lok Sabha poll debacle, Nitish Kumar-led NDA was back in power in Bihar on Wednesday with a slender majority.

The ruling coalition won 125 seats in the 243-member state Assembly against 110 clinched by the opposition Grand Alliance to pave the way for a fourth successive term for Kumar in office but with diminished clout following a debilitating slide in the number of JD(U) lawmakers that came down to 43 from 71 in 2015.

Kumar was then a partner in the Grand Alliance which included Lalu Prasad's RJD and the Congress.

Its defeat notwithstanding, the RJD, whose campaign Tejashwi Yadav, the younger son and heir to party supremo Lalu Prasad helmed, emerged as the single largest party with 75 seats. The BJP, which led the table for several hours during the counting that dragged on for over 16 hours, finished second with a tally of 74 seats.

Despite the slump in numbers, Kumar, who was declared the NDA's chief ministerial candidate by the BJP brass, including Prime Minister Narendra Modi and party chief J P Nadda, is set to take over the reins of the government.

Much of Kumar's plight can be blamed on the damage Chirag Paswan's LJP inflicted on his JD(U). Down in the dumps with just one MLA, the party spoiled the JD(U)'s chances in at least 30 seats.

JD(U) spokesperson K C Tyagi told PTI in New Delhi that a "sinister" campaign was run against Nitish Kumar as part of a "conspiracy".

"Apne bhi shamil the aur begane bhi (Our own also harmed us along with the outsiders)," he said, without taking any names.

He, however, expressed confidence that Kumar will become the chief minister again, noting that top BJP leaders including Prime Minister Narendra Modi and Home Minister Amit Shah have made it clear that he will head the government if the ruling NDA retains power.

Bihar BJP president Sanjay Jaiswal voiced similar views in Patna when he said in Patna "the issue has been cleared by Prime Minister Narendra Modi and party chief J P Nadda much before the elections".

The drastic fall in the number of JD(U) MLAs, however, will likely make the BJP, which hitherto played a second fiddle to Kumar, more assertive, and it may insist on a larger share in the ministerial pie and greater say in governance.

Apart from Kumar's creditable performance as an administrator, the multiple claimants to Muslim votes, including the Grand Democratic Secular Front (GDSF) comprising Asaduddin Owaisi's AIMIM, BSP and Upendra Kushwaha's RLSP worked in NDA's favour and scuppered the Mahagathbandhan's chances. Muslim and Yadav voters have for long formed the bedrock of the RJD's support base.

Owaisi's AIMIM emerged as a surprise package of the election, winning five seats. The party had gained a foothold winning a seat in a by-election in Bihar earlier, but made significant inroads into the Seemanchanchal region which has a large presence of Muslim voters. Its ally BSP also clinched one seat.

Kumar, who has a clean image and is considered incorruptible, has been credited with ridding the state of the "jungle raj", as the Lalu-Rabri government of 15 years preceding 2005 is often described by its critics.

The JD(U) leader also earned praise for his impetus on infrastructure development and improving health care system and education.

Besides, Modi's enduring charisma not only powered the alliance's victory but also helped the BJP to pre-eminent position in the NDA in Bihar for the first time and cut his former bete noire Nitish Kumar, once considered a secular alternative to him, to size.

The election also saw the coming of age of Tejashwi Yadav, who came across as an indefatigable leader after RJD's unprecedented drubbing in the Lok Sabha polls last year when it failed to open its account.

The NDA had clinched all but one of the 40 seats in the state, leaving the young leader in torpor and his party demoralised. Tejashwi's ability to lead the party in the absence of his charismatic father and party supremo Lalu Prasad, who had landed in jail after conviction in fodder scam cases, was called into question.

However, after the Assembly elections were announced, he steeled himself for the struggle ahead and almost single handedly brought the five party Grand Alliance surprisingly close to power in a fight where an army of battle hardened veterans were arrayed against him.

A major upshot of the gruelling electoral tussle between the two alliances was the resurgence of Left, which aligned with the RJD-Congress combine after being pushed to the margins in the post-Mandal era politics of Bihar.

The biggest gainer was the CPI-ML, which clinched 12 seats, followed by the CPI and CPI-M (two each). Barring the CPI-ML, which had three seats in the outgoing Assembly, none of the Left parties had a presence in the House.

Brothers Tejashwi Yadav and Tej Pratap won the Raghopur and Hasanpur seats with impressive margins of 38,174 and 21,139 votes respectively.

State Assembly speaker Vijay Kumar Chaudhary of the JD(U) was among the victors.