Our MLAs not locked up: Sasikala refutes Panneerselvam camp's allegations

Earlier, she claimed it was difficult to be a woman in politics and accused the Oppn of circulating a ‘fake’ letter sent by her to the Guv. 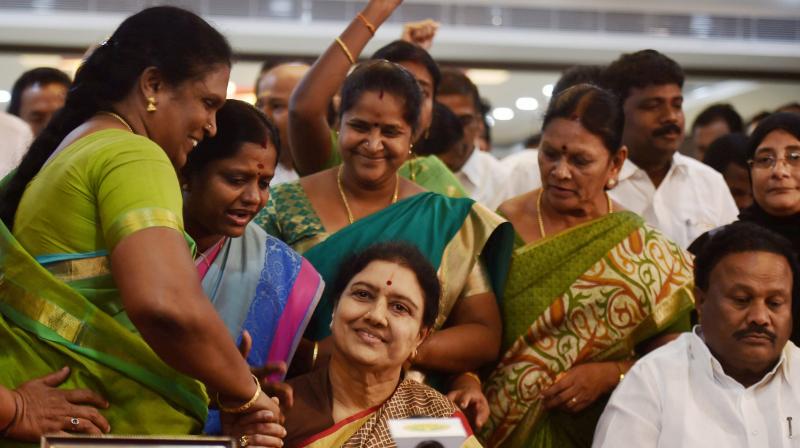 AIADMK General Secretary VK Sasikala along with party's MLAs during the press conference at the resort in Koovathur, Chennai on Sunday. (Photo: PTI)

Chennai: AIADMK general secretary VK Sasikala, who is locked in a political battle with acting Tamil Nadu Chief Minister O Panneerselvam, on Sunday said that party MLAs have not been ‘locked up’.

Rubbishing allegations primarily from the Panneerselvam camp that she had forcibly detained AIADMK legislators to prevent them from crossing over to the CM’s side, Sasikala blamed Opposition parties for ‘spreading rumours’.

“You can see truth that non of our MLAs have been forcibly kept here, we are living here as a family,” Sasikala said after meeting MLAs at Golden Bay resort in Kuvathur.

On a pending Supreme Court verdict in a Disproportionate Assets (DA) case against her, Sasikala was dismissive. “Let it come, I will see,” she said.

But she issued a warning to those who had joined the OPS camp.

“Party workers, and forces now opposing us will not succeed in their attempts. We will now allow it,” she thundered.

About Saturday’s veiled threat to the Governor that she would engage in a ‘different form of protest’ if he did not make a decision on the political deadlock, Sasikala seemed to adopt a softer tone.

“Please wait and see our next move. We are working on it.”

Sasikala broke down while addressing MLAs. “You all are aware as to what extent our opponents have gone against us, we must stay together and foil their evil attempts.

“I think there is a person called Panneerselvam who you had forgotten till now. (But) nobody can even touch this party and government,” said Sasikala addressing AIADMK MLAs.

Earlier on Sunday, Sasikala claimed that it was difficult to be a woman in politics. She accused her Opposition of circulating a ‘fake’ letter sent by her to Governor Ch Vidyasagar Rao.

Speaking to reporters outside Poes Garden residence where she continues to live after the demise of her predecessor J Jayalalithaa, Sasikala, who was elected the legislature party leader a week ago, termed as "fake" a letter in her name and purportedly addressed to Governor Ch Vidyasagar Rao.

"There is a fake letter in my name doing the rounds in social media and a friend brought it to my notice. You (media) should also see it. It is very difficult for a woman to be in politics. Have seen that during purathchi thalaivi's (Jayalalithaa) times also, but she overcame it," Sasikala said.

She said she had seen such "flutter" happen in AIADMK following the death of its founder the late M G Ramachandran, but Jayalalithaa had steered it tactfully and even ensured it won a successive term in last year's polls.

"Since then, there have been efforts to split the party. Those who made such efforts then are doing it today also," she said, in an apparent reference to Chief Minister O Panneerselvam, who has revolted against her, being a member of the faction led by Janaki, the widow of Ramachandran, then.

AIADMK was then divided as Janaki and Jayalalithaa factions. Sasikala asserted, "We are used to these challenges."

"The MLAs are with me. Today also I'm going to meet them (at a resort near here)," she said.

She had yesterday held discussions with the MLAs staying at the resort at nearby Koovathur.

On the 'delay' by Governor Ch Vidyasagar Rao in inviting her to form the government and 10 MPs joining rival camp, she shot back "you very well know" the reason.

On various charges made against her by Panneerselvam, she said they will be responded to at the "appropriate time."

Asked about BJP leader Subramanian Swamy's contention that the Governor has to decide on the issue of government formation by tomorrow, else a court case can be filed charging abetment of horse trading, she said, "We will discuss it."

Meanwhile, addressing her party's star campaigners who include actors and singers, Sasikala assured them that AIADMK would come out of this crisis with the help of grassroots workers.

"Our party and grassroots level workers are with us. They are the true sense of this movement. Be bold, I am with you," she told them.