We threw out trash, Modi took it into BJP: Rahul on tainted leaders

'Modiji has no right to talk about corruption. All scam-tainted leaders who were earlier with us are now with BJP,' he said. 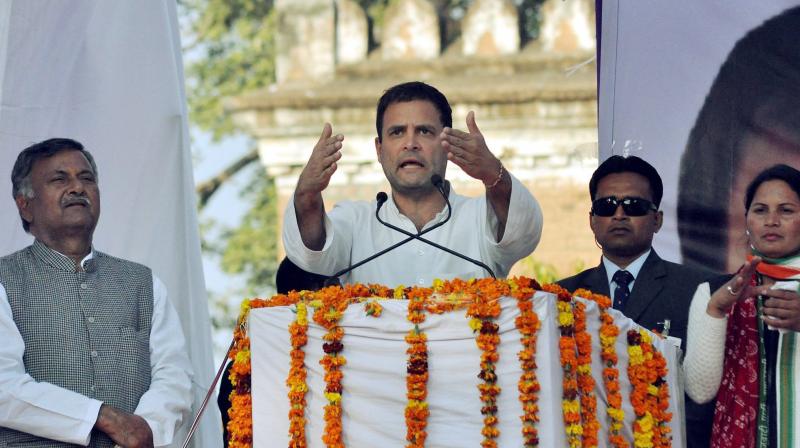 Haridwar: Hitting back at BJP on the issue of corruption, Rahul Gandhi on Sunday asked why Prime Minister Narendra Modi gave tickets to tainted leaders thrown out of Congress and took the "trash" into his party.

The Congress leader, who held a 75-km roadshow here ahead of February 15 polls in Uttarkhand, said Modi had no right to talk about corruption as "tainted" former Congress leaders now adorned BJP's ranks.

"Modiji has no right to talk about corruption. All scam-tainted leaders who were earlier with us are now with BJP," Rahul said at a public meeting in Puhana after starting his roadshow from Bhagwanpur in Haridwar district which has the maximum number of eleven assembly constituencies.

"I had told (Chief Minister Harish) Rawatji that make sure you do not allow corruption. You should put pressure on those indulging in corruption. Modiji says he is fighting against corruption. But I want to ask my BJP friends why have you given tickets to the corrupt leaders we have thrown out of the party? Why does Modiji embrace them? We had thrown out trash from Uttarakhand but Modi has lifted it and put it in his party," he said.

Criticising the PM for his raincoat barb against his predecessor Manmohan Singh, the Congress leader said the words he chose did not match the dignity of the office he holds.

Accusing Modi of failing to bring black money stashed away in 96 countries, the Congress vice-president alleged that he had misled people by demonetisation and made the whole country stand in queues.

Rahul's roadshow in Haridwar district is important because many rebel Congress leaders now in BJP are contesting from seats located in the district including Kunwar Pranav Singh Champion from Khanpur and Pradeep Batra from Roorkee.

Haridwar (rural), one of the two seats being contested by Chief Minister Harish Rawat, is also located in the district.