Rahul Gandhi also slammed the Modi led-BJP government for indulging in hate politics against the people of Tamil Nadu. 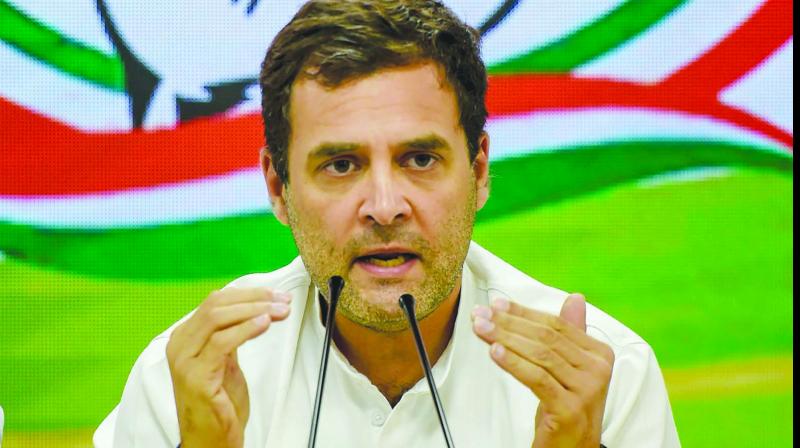 “Some months back we started a process of trying to figure out how much money we can give to the poor people of the country. I asked P Chidambaram some months back that give me a number and do not give me a long list and a big theory,” he said.

“I asked how much money we can give to the poor without harming the economy. The answer was Rs 72,000 per year to 20 per cent of India’s poorest families,” said Rahul, asserting that Congress manifesto represents the voice of India’s people.

Gandhi, who was addressing an election rally, said: “People appreciated our manifesto. In our discussions during the manifesto building process, people told us about NEET. They don't like its imposition on Tamil people. They told us of a young Tamil girl Anitha who committed suicide due to this.”

“If you read our manifesto, you will find a line in her memory. The line says—we will not impose NEET on the youngsters of this state. It seems like a small line in the manifesto but it is actually an expression of the people of Tamil Nadu,” he said.

He said that the 2109 Lok Sabha elections are a clash between two ideologies.

“The Congress party is in favour of different ideas, different history, perspectives, different languages, different culture should live happily together and all voices must be heard. RSS and BJP say that only one idea should govern India,” he said.

Taking a veiled dig at Prime Minister Narendra Modi's radio talk programme, Congress president Rahul Gandhi on Friday evening's rally at Theni said his party's manifesto was not the "Man Ki Baat of one megalomaniac" but talked about work of the nation.

Addressing an election rally in this southern town in Tamil Nadu, he claimed Congress manifesto for the Lok Sabha polls was the voice of the entire nation and he was happy that many people lauded it.

"Congress manifesto is not the "Man Ki Baat of one megalomaniac this is Kam ki Baat (a talk about work) of the nation," he said.

He accused the Prime Minister of pursuing "negative economics" and said people's purchasing power collapsed and it led to goods left lying in factories.

In an apparent reference to allegations that the ruling AIADMK in Tamil Nadu was subservient to the BJP, the Congress president said he was surprised Modi was 'convinced' he can run the state from Delhi.

"He has no idea of Tamil Nadu. I don't think this man has read anything about Tamil history. I dont think he understands Tamil language. He certainly does not under stand the Tamil spirit."

Also, may be a "few books of Karunanidhi ji. The gentleman has no idea of what Tamil Nadu is...I am confident our alliance is going to win," he said.

"He gave you an empty slogan called Make in India but wherever we look we see Made in China products," he said. Be it phone, shoes or shirt "you see made in China," he added. "Now we want real made in India and real made in Tamil Nadu," Gandhi said.

Under Modi, "Make in India" if a young Tamil entrepreneur wanted to start a business he had to knock on the doors of different government offices where "he had to pay bribes," the Congress chief alleged. "By the time he got his permissions the business is already failed," he said.

"But when Tamil farmers are protesting in Jantar Mantar, he has not got even one word to say. They have to take off their clothes and still, he does not pay any attention. He does not have the decency to call them and ask them why they were upset."

The Prime Minister could also be seen sitting with Nirav Modi, Mehul Choksi and Vijay Mallya, but not with any poor person, he alleged. "There is not a single picture of the Prime Minister with a poor farmer or owner of a small business," the Congress chief charged.

Tamil Nadu will not be ruled from Nagpur, Stalin will be CM: Rahul

Earlier on Friday in a public rally in Tamil Nadu's Krishnagiri, Rahul Gandhi slammed the Modi led-BJP government for indulging in hate politics against the people of the state and claimed he would launch a surgical strike on poverty if brought to power.

“BJP wanted to indulge in hate politics against the people of Tamil Nadu. Without love, we cannot win the hearts of the people of this state,” said Rahul Gandhi here.

Accusing the ruling party in the state, Rahul promised Tamil Nadu would be ruled from here and M K Stalin would be the CM.

“We will not allow Tamil Nadu to be ruled from Nagpur. The state will be ruled from here, and Stalin will be the chief minister of the state,” said Rahul Gandhi while concluding his address to the public in the state.