Who sneaked in pamphlets in newspapers maligning AAP's Atishi? 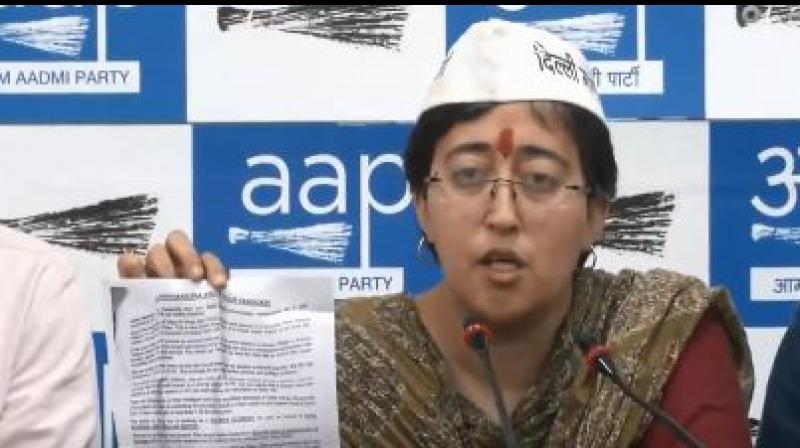 New Delhi: During the election season, no politician can escape political mudslinging. Fierce attacks and criticism define elections. However, everything should be within the perimeter of decency and political civility. At times, things get soggy and the politicians should introspect their behavior and avoid sordid politics.

One such incident came to light on Thursday when Aam Aadmi Party’s  candidate from East Delhi, Atishi held a press conference and blamed Gautam Gambhir, the Bharatiya Janata Party’s candidate from the same constituency for a pamphlet which she claimed to have been distributed by Gambhir through newspapers across Krishna Nagar, Vishwas Nagar and Vivek Vihar in eastern Delhi.

The pamphlet had objectionable content defaming Atishi, Delhi Chief Minister Arvind Kejriwal and Delhi’s Deputy CM Manish Sisodia. The content was in English and its language was derogatory. Sisodia was also present in this press conference where Atishi broke down while stating her stand.

Gambhir denounced the allegations. He said, “I declare that if it’s proven that I did it, I will withdraw my candidature right now.” He also sent a defamation notice to Kejriwal, Sisodia and Atishi demanding an apology.

My Challenge no.2 @ArvindKejriwal @AtishiAAP
I declare that if its proven that I did it, I will withdraw my candidature right now. If not, will u quit politics?

Newslaundry tried to de-clutter this story. Newslaundry’s correspondent Ayush Tiwari spoke to people at ground zero to join the dots.

Two makeshift depots distribute newspapers in Krishna Nagar and Vishwas Nagar. Vivek Vihar has a separate newspaper depot. The Newslaundry spoke to distributors and vendors to find out if the pamphlet was distributed from their depots.

“If any pamphlet is inserted into the newspaper here, I know about it, because I run this place. But I did not see any such pamphlet. There is a very slim possibility that some vendors are stopped and asked to put pamphlets in exchange for money after they take their stacks from here,” Uma Shankar, who manages distribution at Krishna Nagar depot, told Newslaundry.

A man who was inserting pamphlets inside the newspapers also rubbished the existence of any such pamphlet. However, he didn’t deny the possibility of someone inserting the pamphlet in exchange of money.

“I haven’t seen this parcha (pamphlet) in the newspapers that I carry,” said Ram Avtar, a hawker. Newslaundry spoke to numerous hawkers but none had any clue about it.

“There were promotional pamphlets from the Congress, the BJP and the AAP that went with the newspapers yesterday, but none of them looked like this,” said Jai Singh, a hawker.

Similar to Krishna Nagar depot, Shahdara witnesses a similar routine. “I haven’t seen this pamphlet anywhere. In fact, I wasn’t given any normal promotional pamphlets of the AAP to distribute. I don’t know much about this matter,” said Deepak Pandey, who supplies newspapers from this depot to Vishwas Nagar.

“I myself have been making sure that the AAP pamphlets leave with the newspapers in Vivek Vihar since the last eight days. But we never came across this one. I think Atishiji is a little mistaken or even misled,” Ramakant, who manages distribution at Vivek Vihar, said.

However, The Indian Express reported that a vendor was paid to insert 300 of such pamphlets inside newspapers distributed in Sapna Vihar and Yojana Vihar.

AAP spokesperson Akshay Marathe said that no vendor would admit to have done this given the Election Commission’s Model Code of Conduct. Marathe admitted that Gambhir’s involvement couldn’t be proved without any hard evidence.

He added: “We think this pamphlet was generated by the BJP because it reeks of communal and misogynistic tendencies that the BJP has displayed in the past few years. Who else could it be?”

The residents of Krishna Nagar denied receiving this pamphlet. Sandeep Sharma, the nigam parshad (municipal councillor) in Krishna Nagar who was once the general secretary of the area’s RWA, said, “What you’re witnessing is dirty politics between two parties. That’s all.”

Most of them, however, seemed convinced that the AAP had distributed the pamphlet itself for electoral drama.

The AAP claimed that four people have received this pamphlet. Out of the two names disclosed by the AAP, Alam Gir is the President of the Resident Welfare Association of Rani Garden in East Delhi’s Geeta Colony and Rakesh Verma resides in Surajmal Vihar.

While both admitted to have received the pamphlet on May 2, Gir said, “I don’t believe they’re (BJP) doing this. Not that politics is clean but I’m confident they’re not behind this.” Verma had no thoughts about the origins of this pamphlet.

The Newslaundry correspondent met two other local RWA presidents in Krishna Nagar and contacted another two in Vishwas Nagar. All four claimed that they were not sent the pamphlets by either post or through a newspaper.