They were marching towards Lal Bazar protesting against TMC government in West Bengal. 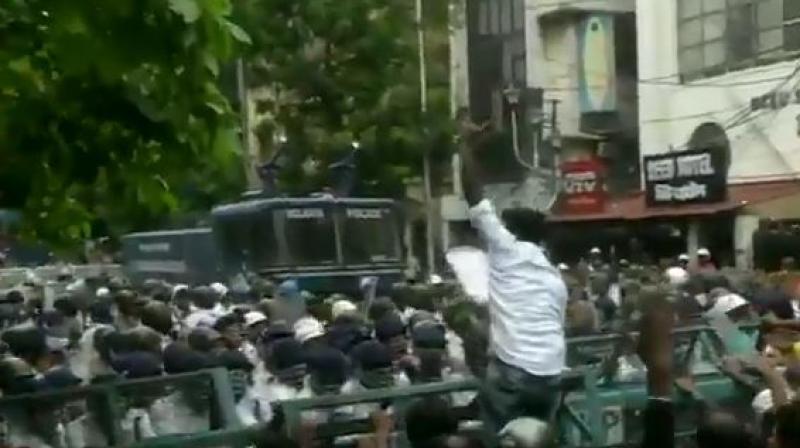 As huge crowds gathered in Kolkata near the police headquarters, police erected barricades to stop the protests from flaring up. (Photo: ANI)

Kolkata: BJP workers on Wednesday launched a massive protest in the heart of Kolkata to protest against killings of party workers across the state.

As huge crowds gathered in Kolkata near the police headquarters, police erected barricades to stop the protests from flaring up.

They were marching towards Lal Bazar protesting against TMC government.

BJP workers carrying party flags were seen climbing up barricades set up by Kolkata Police to reach the police headquarters. This is when police shot off the water cannons to disperse the crowd.

In retaliation, the saffron party workers raised slogans and hurled stones and bottles at the officers. Some of the party workers were seen holding a sit-in demonstration in the area in protest.

The saffron party workers, along with 18 newly elected MPs in the state, including BJP state president Dilip Ghosh, were marching towards the Kolkata Police headquarters in Lalbazar from the Wellington area of the city.

Bengal's BJP minder Kailash Vijayvargiya and senior party leader Mukul Roy also joined the march. Post-poll violence has been reported from various places of West Bengal after the BJP secured 18 of the 42 Lok Sabha seats in the state, just four less than that of the TMC.

Roy Tuesday blamed Chief Minister Mamata Banerjee for the clashes in North 24 Parganas' Sandeshkhali on Saturday that claimed three lives, and demanded an investigation into the violence by anti-terror probe agency NIA.

Banerjee had earlier accused the BJP of "spreading false information as part of a game plan to topple her government".