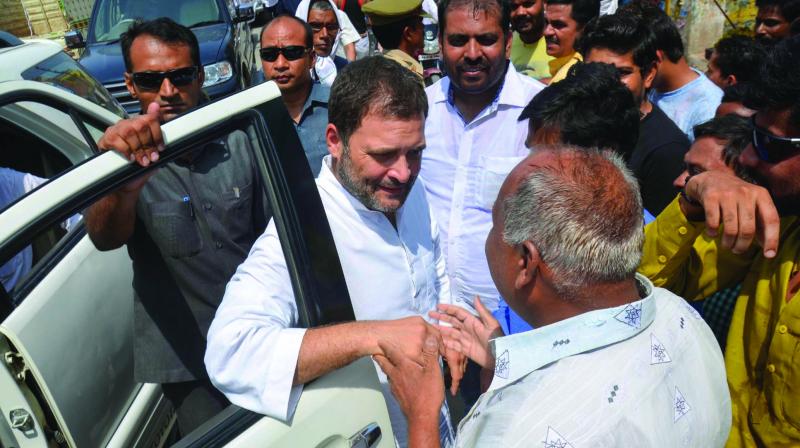 This meeting with Muslim intellectuals was a part of the campaign for next year Lok Sabha elections. (Photo: PTI | File)

New Delhi: Congress President Rahul Gandhi met Muslim intellectuals on Wednesday, addressing concerns that his party was adopting a ‘soft-Hindutva’ agenda. It is believed that Gandhi told them that his party would take an inclusive approach for all sections of the society.

Gandhi met intellectuals in Delhi and assured them the Congress has no specific agenda for any specific religion or section of the society.

According to reports, intellectuals shared their concerns with Congress President stating that the Muslim community is feeling threatened as his party is adopting ‘soft-Hindutva’ approach to win Hindu votes.

Gandhi assured that his party wouldn’t compromise on it ideology and wouldn’t allow injustice to anyone. Hitting at BJP, he said BJP believed in the division but Congress believes in inclusiveness as it has to take everyone along. He also said that BJP is creating an atmosphere of division among people (referring to lynching, beating up Dalits and Muslims) and divert citizen’s attention from important issues and focusing on emotional issues.

Party’s spokesperson, Priyanka Chaturvedi said, “Our doors are open for everybody”.

One of the attendees said that they had advised Gandhi, not to about the Muslim Community but rather speak on issues related to more citizen-centric like poverty and education. He was also asked to introspect on party’s past and how Congress worked in the 1970’s when it talked about ‘ínclusiveness’ and ‘Sajha virasaat’ (Shared legacy).

This meeting with Muslim intellectuals was a part of the campaign for next year Lok Sabha elections.