CM Jagan Reddy had said that the previous TDP government did not pay even a single penny under the interest- free loans scheme. 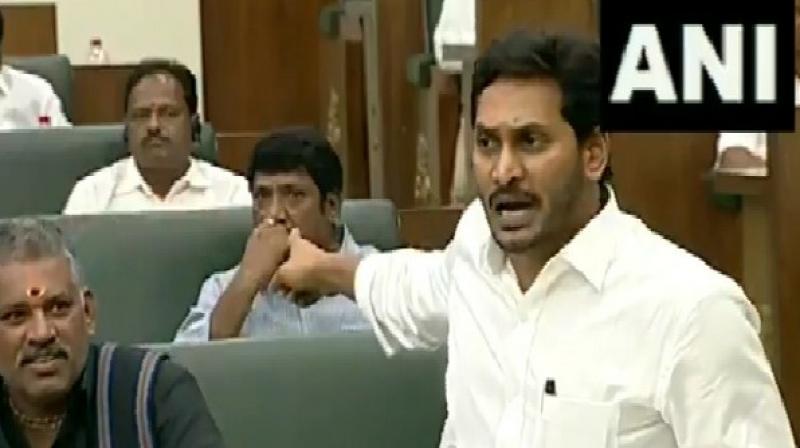 As TDP MLAs continuously tried to interrupt him, Reddy objected to their behaviour and commented that the TDP members were acting in a high-handed manner. (Photo: ANI)

Amaravati: Andhra Pradesh Assembly on Friday witnessed heated exchanges between the ruling and the opposition members during a debate on an adjournment motion moved by the TDP over Chief Minister Jaganmohan Reddy's comments in the House on Thursday during a discussion on drought situation in the state.

Jagan had said that the previous TDP government did not pay even a single penny under the interest- free loans scheme. He even challenged TDP leader N Chandrababu Naidu to prove the contrary or resign to his position.

When the motion was taken up for discussion this morning after suspending question hour, TDP alleged that Reddy had misled the house on the matter of interest free loans.

TDP MLA N Rama Naidu said that The Chief Minister has made sarcastic comments on a senior leader with a long political career. He had challenged whether Naidu will resign on the matter of interest free loans.

"It is not correct to say that interest free loans were cancelled during our regime. During our tenure, we paid interest free loans Rs 349 crores for 2013-14, Rs 44 crores for 2014-15. Rs 570 crores are pending in 2017-18. Is it not true that the chief minister denied paying that amount when bankers asked the government to release those funds in the recent State Level Bankers Committee meeting?" he asked.

Leader of opposition Chandrababu Naidu said, "Reddy spoke very aggressively during the discussion on interest free loans. However, I am speaking on the basis of documents and not as per my whims and fancies."

Naidu recalled that their government had paid the old dues of interests from 2011. "You asked me to resign yesterday. Now we have disclosed the facts. Will the Chief Minister resign now or apologise to the public?" the former chief minister asked.

Responding to the TDP members, Reddy said, "Though Naidu claimed that he had implemented the interest free loans scheme successfully. In fact, it was merely a big zero. Though they have not provided any funds for interest free crop loans, they are claiming as if they had done it. That's why the people have let them sit in opposition."

"I am speaking only after Naidu and TDP leaders completed their statements. I am the only one speaking on behalf of the ruling party. But the opposition MLAs are interrupting me and not allowing me to complete my answer. In fact, we allowed the discussion even before Question Hour," Reddy said.

As TDP MLAs continuously tried to interrupt him, Reddy objected to their behaviour and commented that the TDP members were acting in a high-handed manner.

Speaker Tammineni Seetaram lost his cool at one point and said, "This is not a fish market. People are watching us. Nobody should interrupt the speeches of Leader of Opposition or the Leader of the House."