Rahul flays govt over suicide of farmers, Rajnath hits back 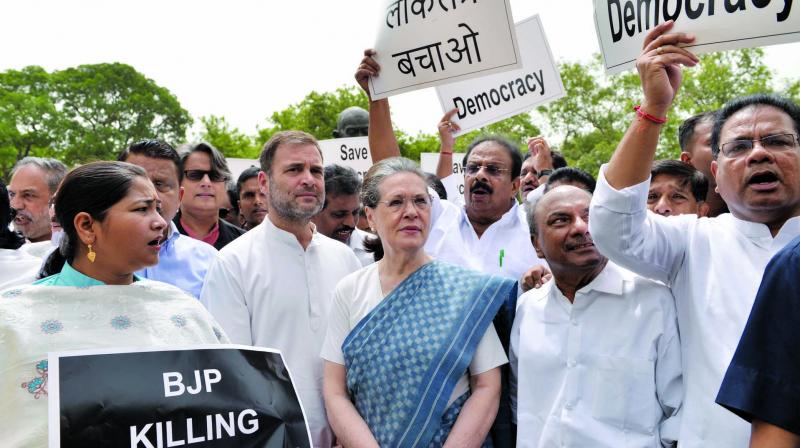 Congress leaders Rahul Gandhi, Sonia Gandhi and A.K. Antony during a protest at the Parliament in New Delhi during the Budget Session on Thursday. (Photo: Asian Age)ASIAN AGE

He urged the Central government to direct the Reserve Bank of India (RBI) to consider the moratorium declared by the Kerala government and ensure that the banks do not threaten the farmers with recovery notices.

Taking up the farmer’s issue, Mr Gandhi said, “Farmers are suffering throughout the country. I would like to draw the attention of the government to the terrible plight of farmers in Kerala. It hurts me to inform this House that just yesterday Enkittan, a farmer in Wayanad, committed suicide due to his crushing debt. In Wayanad alone, bank notices for non-payment have been given to almost 8,000 farmers. They are facing the threat of immediate eviction under certain Acts. Their properties are attached against their bank loans. This is resulting in a spate of farmers’ suicides.”

He added that in Kerala, 18 farmers have committed suicide since banks began recovery procedure one-and-a-half-year-ago.

“The government of Kerala has announced a moratorium on repayment of farm loans for all Kerala farmers till December 31, 2019. But the government of India is refusing to direct the RBI to consider this moratorium and get it implemented,” he said.

He also accused the BJP-led central government of favouring the rich more than the farmers and poor.

“In the last five years, the BJP Government gave Rs 4.3 lakh crore in tax concession and waived Rs 5.5 lakh crore for rich businessmen. Why is this shameful double standard? Why does the government treat our thinks our farmers are inferior than the rich?  I was sad to see that no concrete step was taken in this Budget, to provide relief to the farmers. I would like to request the central government to direct the RBI to consider the moratorium declared by the Kerala government and ensure that the banks don’t threaten the farmers with recovery notices,” he said.

He also urged the Prime Minister to take steps to provide relief to the farmers.

Responding to him, defence minister Rajnath Singh said that his government has done a lot for the farmers and the suicides have been least during the last five years.

He also blamed the previous Congress government for not handling the issue of the agrarian crisis well.

“Prime Minister has given Rs 6,000 to the farmers which has increased their income by 20-25 per cent,” Mr Singh said.