A couple of days ago, a poster appeared outside party office here demanding to appoint Mr Scindia as the next Congress president. 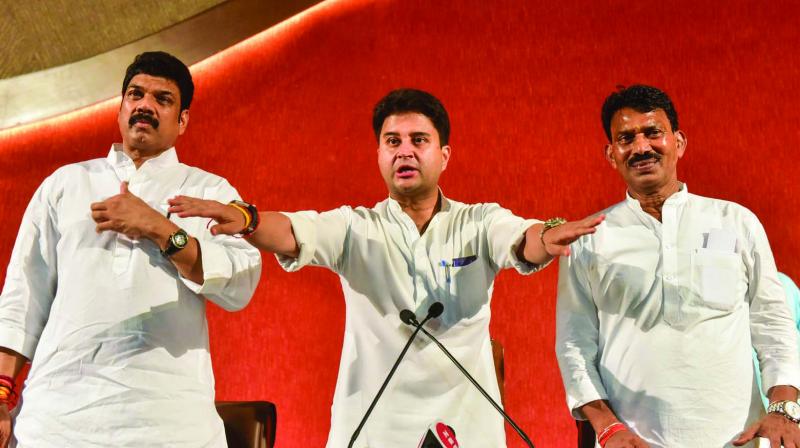 Senior Congress leader Jyotiraditya Scindia, along with Cabinet ministers Govind Rajput and Tulsi Silawat, before addressing a press conference during ongoing monsoon session of the state Assembly in Bhopal on Thursday. (Photo: PTI)

Bhopal: Days after Rahul Gandhi stepped down as AICC president, senior Congress leader Jyotiraditya Scindia on Thursday batted for an “energetic chief” to lead the party in this “hour of crisis”.

Talking to reporters here, Mr Scindia said Mr Gandhi’s successor should be dynamic enough to galvanise the party and carry along with him Congress workers and leaders. The party workers should follow the path shown by Mr Gandhi, he added.

Mr Scindia who landed here in the morning on a two-day-visit to Madhya Pradesh described Mr Gandhi’s resignation from the post of Congress president as “most unfortunate” and said the latter’s decision to not to lead Congress had landed the party in “grave crisis”.

Replying to a question as to if he was in the race to lead the party, Mr Scindia said, “All through my 17-year-long political career, I have never been after ‘kursi or satta’ (position or power). I have tried my best to accomplish the assignment given to me by the party leadership. I have fought for development, not for power”.

“Congress is currently passing through a grave crisis. It is the responsibility of workers and leaders of Congress to see through the period of crisis and ensure that the party is strengthened”, he added.

Incidentally, a couple of days ago, a poster appeared outside party office here demanding to appoint Mr Scindia as the next Congress president.