India   Politics  12 Jul 2020  All the country's land is with us: ITBP and BSF DG on Ladakh standoff
India, Politics

All the country's land is with us: ITBP and BSF DG on Ladakh standoff

The BSF with about 2.5 lakh personnel is primarily tasked to guard Indian fronts with Pakistan and Bangladesh 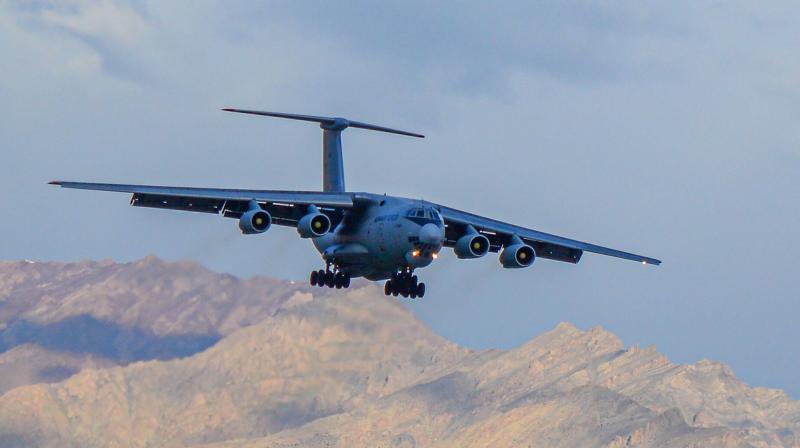 An IAF plane flies over Leh in Ladakh. PTI photo

Gurgaon: As Chinese and Indian troops move to disengage in eastern Ladakh after a tense standoff, the chief of ITBP and BSF on Sunday said all the country's land is under "full possession" of our security and defence forces.

S S Deswal, Director General of the Indo-Tibetan Border Police (ITBP) and the Border Security Force (BSF), was speaking to reporters on the sidelines of a plantation drive held at a BSF camp in Bhondsi.

"All the country's land is with us. Our land is in full possession of our security forces," Deswal told reporters here.

He made the remarks when asked to comment on the current military standoff along the Line of Actual Control (LAC) in eastern Ladakh.

"All our borders are safe, be it the eastern, western or northern. The security forces of the country are very active, capable and dedicated.They are capable to protect the borders against any kind of enemy with all their might and efficiency," the 1984-batch Indian Police Service (IPS) officer said.

According to people familiar with the development, Chinese military has further thinned down its presence in the ridgeline of Finger Four and removed some boats from the Pangong Tso lake in eastern Ladakh ahead of another round of Lt General-level talks between India and China aimed at finalising modalities for complete disengagement along the LAC.

When asked if the ITBP had moved more troops to its posts along the LAC, Deswal said the forces are moved across the country as per requirement.

"The morale of the troops of the army and border guarding forces is very high. Since independence, the security forces have made numerous sacrifices to protect the country's borders and for security of the country whether is is external threat or internal security," he said.

"You can see our forces are quick and alert to ensure protection even at the cost of their lives," Deswal said.

All the security arrangements are in place at the borders and we can say that the country's security is ensured, he said.

Deswal is the head of the ITBP and has been holding an additional charge of the BSF for over four months now.

The about 90,000 personnel strong the ITBP is a mountain-warfare trained force tasked to guard the 3,488-km-long LAC with China.

It was raised in 1962 in the aftermath of the Chinese aggression and has decided to move at least 60 fresh companies to various locations along the LAC in the wake of the current situation in Ladakh.

An ITBP company has an operational strength of about 100 troops.

The BSF with about 2.5 lakh personnel is primarily tasked to guard Indian fronts with Pakistan and Bangladesh.