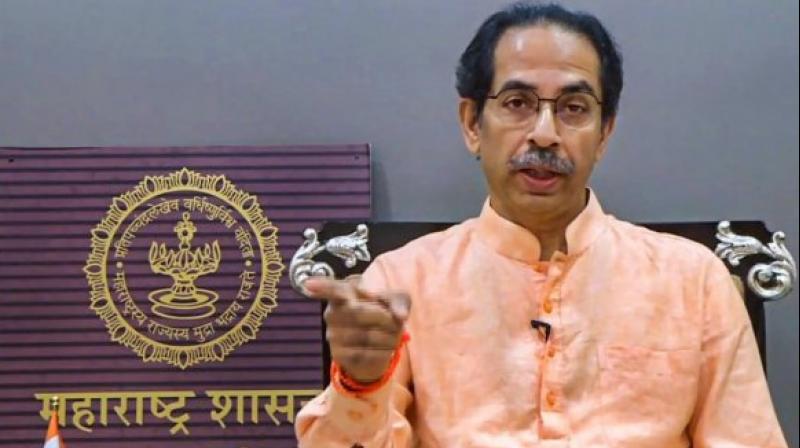 The sources claimed that the Sena chief (in picture) listened to them patiently and would communicate his views to the top leadership of NCP and Congress in coming days. — PTI

Mumbai: More than a month after the Maha Vikas Aghadi (MVA) government led by Uddhav Thackeray was ousted out of power in Maharashtra, top strategists of the three-party alliance are making hectic efforts to keep the formation alive and fight the ensuing local bodies together. In this effort, a delegation of NCP leaders met Shiv Sena chief Uddhav Thackeray on Wednesday.

A delegation of NCP leaders Jayant Patil, Ajit Pawar, Chhagan Bhujbal and Sunil Tatkare met the Shiv Sena chief late evening on Wednesday. According to the sources, the delegation discussed the current changing political situation in the country. They urged the Sena to remain a part of the MVA and fight upcoming elections together as it would be difficult for the Sena to survive in the state’s politics alone.

The Sources claimed that the Sena chief listened to them patiently and would communicate his views to the top leadership of NCP and Congress in coming days.

When asked about the NCP leaders’ meeting with Mr Thackeray, Mr. Patil said,  “This was a courtesy call,” he said.

However, Shiv Sena’s move to unilaterally decide the leader of opposition in legislative council has miffed Congress and NCP.

Shiv Sena MLC Ambadas Danve was appointed to the post earlier this week. Maharashtra NCP chief Jayant Patil said that Shiv Sena should have discussed the appointment of Mr Danve with Congress and NCP.

Upset with the decision of hurriedly appointing Mr Danve as LoP in the council, Maharashtra Congress chief Nana Patole said, “We will raise this issue in the next meeting of the MVA.”

He also pointed out that when he had stepped down from the post of speaker of Assembly, he went to apprise the then chief minister Uddhav Thackeray and the then deputy chief minister Ajit Pawar.

Mr. Patole went on saying that Congress's alliance with Shiv Sena is not natural and it was done under extraordinary circumstances for the interest of the people in Maharashtra.

A Shiv Sena leader, requesting anonymity, said that it is true to some extent that Mr Danve’s appointment was done without consulting the Congress and the NCP. “Due to the current political situation in the state, we have hurriedly appointed him as leader of opposition in the council,” he said.