VK Sasikala may be ousted as AIADMK general secretary

THE ASIAN AGE. | E T B SIVAPRIYAN AND S THIRUNAVUKARASU

A steering committee, to be headed by deputy chief minister O. Panneerselvam, is also expected to be appointed at the meeting. 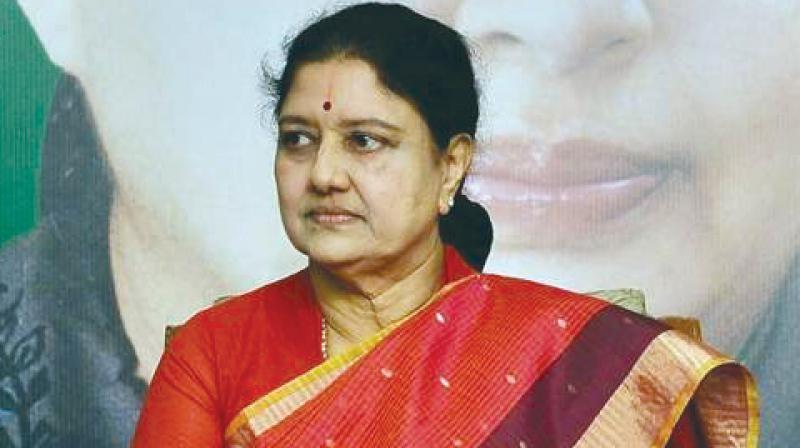 Chennai: The late Tamil Nadu chief minister J. Jayalalithaa’s long-time aide and confidante V.K. Sasikala will be removed as “interim” general secretary of the AIADMK at the much-awaited General Council scheduled here on Tuesday. A steering committee, to be headed by deputy chief minister O. Panneerselvam, is also expected to be appointed at the meeting.

Three resolutions — sacking Ms Sasikala from the post to which she was appointed in December 2016 immediately after the death of Ms Jayalalithaa, ratifying the merger of rival EPS and OPS factions and appointing a steering committee to run the affairs of the party till a “full-time” general secretary is appointed are expected to be moved at the meeting and may be passed unanimously.

Decks for the conduct of General Council were cleared by the Madras high court late on Monday night as it dismissed a petition filed by T.T.V. Dhinakaran supporter and Perambur MLA P. Vetrivel who demanded a stay on the meeting expected to be attended by a majority of 2,780 members.

Besides MPs and MLAs, headquarter secretaries will participate in the council meeting as “special invitees” and EPS-OPS camp insiders maintained there would 90 to 95 per cent attendance at the meeting. As the EPS-OPS faction fear supporters of the Sasikala family would create trouble at the venue — Sri Varu Venkatachalapathy Palace in Vanagaram on the outskirts of the city, more than a hundred “private security personnel” have been deployed in the premises, besides heavy presence of police personnel. Sources said the invitees to the meeting would be allowed inside the premises only if they show their photo identity card along with the invitation sent to them by the party high command. Highly-placed sources in the AIADMK told this newspaper that they expect the General Council to be a smooth affair since leaders have been taken into confidence about the decisions to be taken.

“The agenda of the meeting is to remove Ms Sasikala from the post and  party since it was one of the major pre-conditions set by O.Panneerselvam for merging his faction with EPS camp,” a senior leader told this newspaper.

On the day of the merger of the factions, Rajya Sabha member R Vaithilingam had announced that Sasikala would be removed as general secretary and that a formal resolution would be moved at the general council meeting to be convened.

Though it is certain that Mr Panneerselvam would head the steering committee that will run the party till “proper elections” are held to elect new leader, there was confusion on the composition of the panel with reports suggesting that it could either have seven, nine or eleven members.