‘Democracy is at peril. The mandate is being misused and abused in the most dangerous fashion,’ the Congress interim president also said. 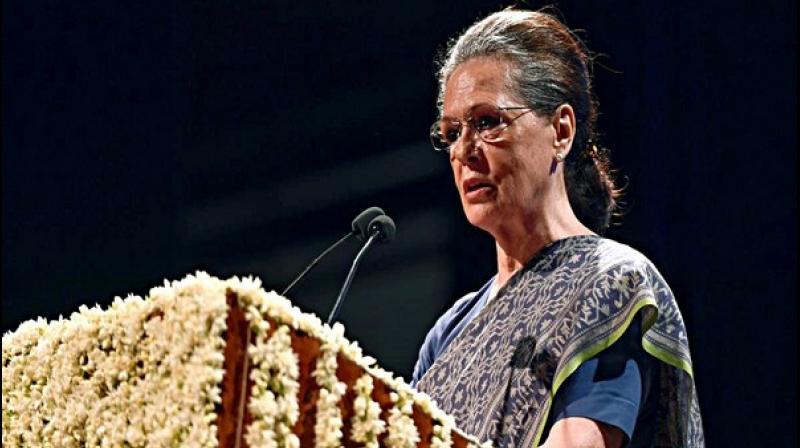 ‘Appropriation of leaders like Gandhi, Patel, Ambedkar being done with an aim of misinterpreting their true messages to further their nefarious agenda,’ she added. (Photo: ANI)

New Delhi: Launching a scathing attack on the Centre, Congress president Sonia Gandhi on Thursday said the economic situation in the country is very grim, but the government is indulging in unprecedented 'vendetta politics'.

In a party meeting in New Delhi, Gandhi said, "The economic situation is very grim. Losses are mounting. All that the government is doing is indulging in unprecedented vendetta politics to divert attention from mounting losses."

"Democracy is at peril. The mandate is being misused and abused in the most dangerous fashion. Appropriation of leaders like Gandhi, Patel, Ambedkar being done with an aim of misinterpreting their true messages to further their nefarious agenda," she added.

Former Congress president Rahul Gandhi was not present in the meeting. "The Congress party must have an agitational agenda. Our resolve on resilience is being tested now," she was quoted as saying by the sources.

Congress sources told ANI that Party to appoint 'preraks' as messengers to carry forward the party message on various issues, ideological standings and to bust any myth surrounding Congress. These three 'preraks' to be appointed at divisional level. Out of the three, one will be a woman and one from SC/ST/Minority/OBC background, where each division will constitute of 4-5 districts.

According to sources, the meeting agenda will revolve around Gandhi Jayanti preparations, membership drive and party worker training. Among those on the dais are former PM Manmohan Singh and senior leader Ghulam Nabi Azad.

Madhya Pradesh chief minister Kamal Nath, however, gave the meeting a miss, but senior MP leader Jyotiraditya Scindia is in attendance, reported News18. Priyanka Gandhi Vadra and other general secretaries and state Congress chiefs are also likely to be present at the crucial meet that will also discuss ongoing economic slowdown.

The preparations for Gandhi Jayanti are being seen as Congress's strategy to counter the Narendra Modi government’s plans. The grand old party workers will carry out padyatras across the country, wearing Gandhi topis and holding seminars.