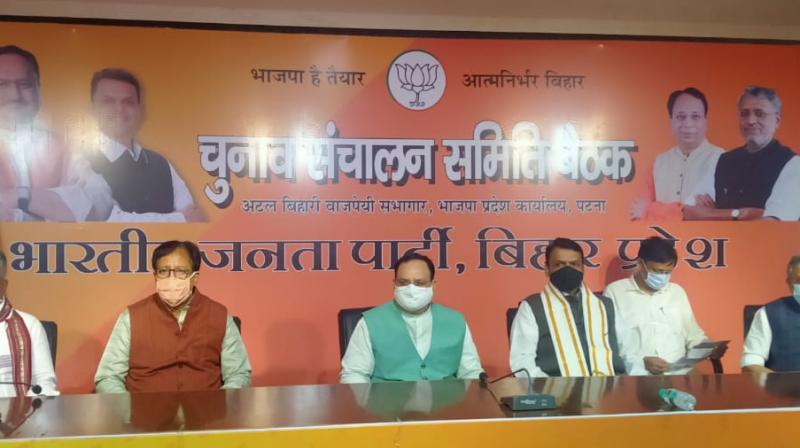 PATNA: Former Maharashtra CM Devendra Fadnavis on Friday clarified that the death case of Bollywood actor Sushant Singh Rajput was not an election agenda for the NDA in Bihar.

“We don’t want to make this an election agenda. Sushant Singh Rajput is the son of Bihar and people across the country want justice for him. We would ensure that he gets justice”, Fadnavis said.

Sushant Singh Rajput who hailed from Bihar was found hanging at his apartment in Mumbai’s Bandra on June 14. The CBI, Enforcement Directorate (ED) and Narcotics Control Bureau (NCB) are investigating the case from various angles.

The case was handed over to CBI after a tussle between Maharashtra and Bihar police. The state government had recommended CBI probe into the case after the late Bollywood actor’s father KK Singh filed an FIR against actress Rhea Chakraborty, her family and six others for abetment of suicide of his son.

Sushant Singh Rajput’s girlfriend Rhea Chakraborty was arrested on Tuesday by the NCB.

A week earlier, the BJP poster campaign seeking justice for Sushant Singh Rajput had created a flutter in poll-bound Bihar. The Opposition parties in the state especially RJD had then said that the BJP was distributing posters, pamphlets and masks to influence voters ahead of polls.

As per a report over 30,000 posters and stickers and 30,000 masks bearing the picture and the slogan “justice for Sushant” have been printed and distributed in Patna and other districts of the state.

Fadnavis along with BJP Chief JP Nadda are in Bihar to assess the party preparedness for assembly elections which is slated to be held in November this year. Sources said that the BJP has been worried after an internal survey carried out by party leaders showed anti-incumbency against Bihar CM Nitish Kumar and the NDA.

The report suggests that during Nadda’s visit, the party would discuss ways to reach out to voters and inform them about policies launched by the state as well as the central government.

According to RJD leaders in Patna, with Chief Minister Nitish Kumar losing ground in the state, the BJP wants to influence voters by using Sushant Singh Rajput case but people of Bihar are aware that our leader Tejashwi Yadav was the first to demand CBI probe on the issue.