Karat alleged that the BJP-RSS is trying to destabilize CPI(M) ruled states like Kerala, Tripura, WB in the name of 'red and jihad terror'. 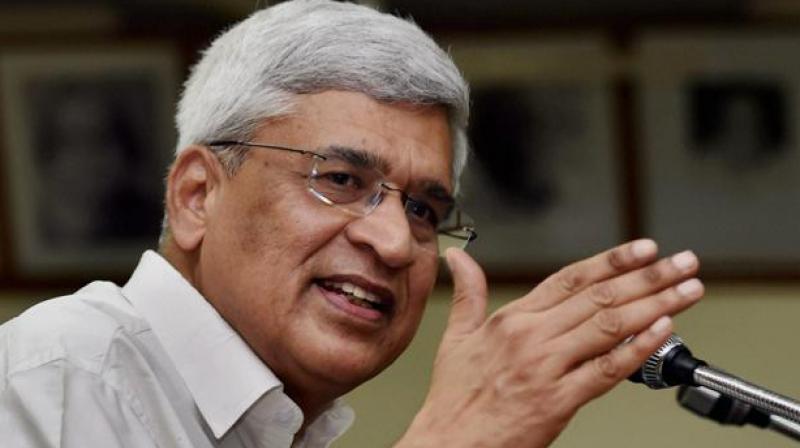 Prakash Karat also criticized the initiative of the government for privatization of the public sector like the aviation and even railways, which according to him, is just to help the industrialists.(Photo: PTI)

Agartala: Communist Party of India (Marxist) (CPI(M)) is building a common platform under which various political and mass organisations from all sections and secular-democratic forces at the national level will come together to fight the evil design of the Rashtriya Swayamsevak Sangh (RSS) being implemented through the Bharatiya Janata Party (BJP), says CPI(M) top leader Prakash Karat

Karat, CPI(M) Polit Bureau member and former General Secretary of the party, on Wednesday made this statement while addressing an event to mark the centenary year of the October Revolution in Agartala.

According to him, the October Revolution was responsible for unleashing a wave against imperialism and setting in motion a new democratic system across the world and the present phase in which India is, there is necessity for a similar revolution to counter the Narendra Modi-led Government which is creating threats to country's sovereignty by turning out as the junior partner of USA through military agreements and opening foreign investments in its ordinance factories.

He criticized the initiative of the government for privatization of the public sector like the aviation and even railways, which according to him, is just to help the industrialists.

Karat claimed that the Communists have made the biggest sacrifice in India's independence struggle against imperialist British rulers, while the RSS did not have any role as they did not believe in freedom from the British and were rather more worried to make India a Muslim-free nation.

Karat also alleged that the BJP-RSS, as per its last National Executive Conference decision, is trying to destabilize and disturb the CPI(M) ruled states like Kerala and Tripura besides West Bengal in the name of 'red and jihad terror'.