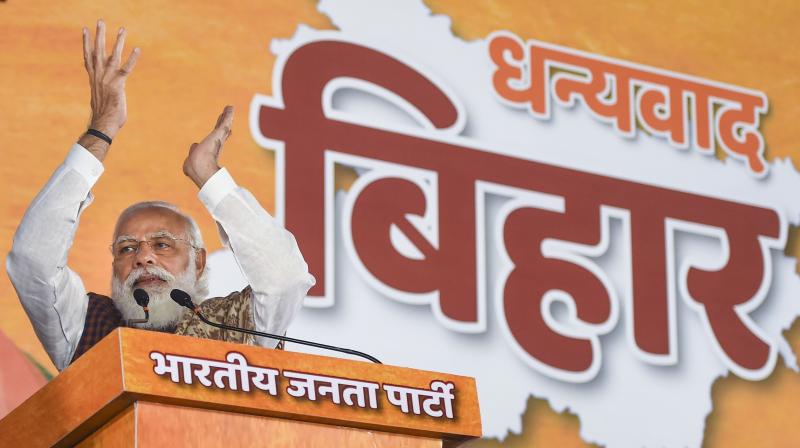 New Delhi: Hailing Bihar Assembly poll results as a “saaf-suthra (neat and tidy)” mandate, Prime Minister Narendra Modi on Wednesday said the secret behind NDA’s victory is “Sabka saath, sabka vikas, sabka vishwas (Marching together for development of all, with the trust of all).”

Addressing BJP workers at the party headquarters in Delhi, Mr Modi also gave rest to speculation about whether or not incumbent chief minister and JD(U) chief Nitish Kumar will continue to hold the top post in the state due to his party’s dismal performance. Mr Modi insisted that the ruling NDA will fulfil its promises made under Mr Kumar’s leadership.

Facing major anti-incumbency against the Nitish Kumar-led government and the chief minister himself, the BJP heavily depended on its “star campaigner” Mr Modi’s charisma and Central government schemes to woo voters.

Mr Kumar also thanked the Prime Minister for his support.

While the NDA retained power with the BJP outnumbering ally JD(U), the latter registered its worst performance in two decades.

Praising Bihar’s voters  as “paarkhi (good at judging)” and “jaagrook (aware),” Mr Modi, who was showered with flower petals and chants of “Bharat Mata ki Jai” upon his arrival, said Bihar is “most special” and its voters have once again proved why the state is called the land of democracy. Mr Modi said the BJP’s governance model is the reason behind its success and that the development plank won the polls.

“The secret of winning the election is sabka saath, sabka vikas, sabka vishwas. This victory is of the youth, women, poor, farmers, aspiration and pride… Bihar has once again proved why it is called the land of democracy,” said the PM. He said 21st century voters are making it clear that they will vote for only those who are committed to development and have been choosing those who work for the country and are interested in it. He said the poll results have also endorsed the way the government has tackled the Covid-19 pandemic.

While thanking the people of Bihar and the BJP-NDA cadres for the poll victory, Mr Modi, without naming anyone, took on the Opposition, in particular the Congress, saying, from Kashmir to Kanyakumari, many political parties are becoming a “threat to the democracy” as they are limiting themselves to dynasty politics or just one family.

He said unfortunately one national party has been gripped by a family and it becomes all the more important for the BJP to strengthen internal democracy and make it an example for others.

At the same time, Mr Modi also sent a message to the Mamata Banerjee-led ruling TMC in West Bengal where Assembly polls are lined up early next year, that it should “read the writing on the wall” as killing BJP supporters will not help in winning a mandate. The BJP has been accusing the TMC of political killing of its workers and supporters in the state.

Mr Modi also thanked BJP president J.P. Nadda for steering the party’s campaign in the just concluded polls. He also thanked people for the BJP’s performance in the bypolls in several states.

Calling “naari shakti (women's power)” as the “silent voter” of the BJP, Mr Modi said this silent voter has been continuously supporting the party – in both rural and urban areas – while the youth have faith in democracy. He also said that no re-polling and peaceful voting were the distinctive features of polls in Bihar where booth capturing used to be the headlines earlier.

With the festive season just around the corner, Mr Modi asked people to celebrate Diwali with full fervour while taking care of their family and remaining cautious. He also asked people to be “vocal for local” while purchasing goods.