Poll results may pave way for Congress, SP, BSP alliance in UP

Mayawati, who has summoned all her winners to Delhi, will take her own time and drive a bargain for UP polls before she announces support to Congress. 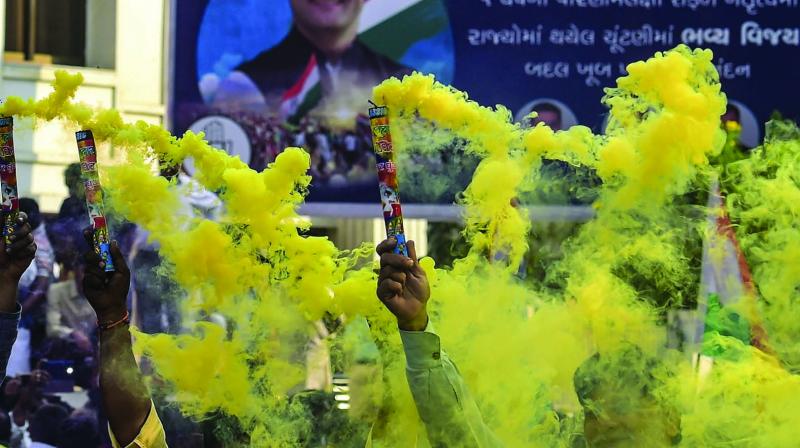 Lucknow: The election results in Chhattisgarh, Rajasthan and Madhya Pradesh will now pave the way for formation of a grand alliance in Uttar Pradesh for the Lok Sabha elections.

The BSP and the Samajwadi Party have already announced that they will not support BJP and the SP has announced support to the Congress in Madhya Pradesh.

Ms Mayawati, who has summoned all her winners to Delhi, will take her own time and drive a bargain for UP polls before she announces support to Congress. She has already declined to support the BJP.

Both BSP and SP, had termed the Congress as “arrogant” till a few days ago and SP president Akhilesh Yadav had even said that if need be, he would take the hand (Congress symbol)  off the cycle (SP symbol) handle.

For the BSP, the Congress coming to power in Chhattisgarh is a major setback since Ms Mayawati had expected to form government by crossing the halfway mark along with Mr Ajit Jogi’s Janata Congress Chhattisgarh.

In the past, there have been instances when BSP MLAs in Rajasthan and Haryana have crossed fences to merge into the ruling party and the same cannot be ruled out this time too.

A senior BSP MLA admitted, albeit on condition of anonymity, that “Somewhere we over-estimated ourselves and it was because of this that the party did not attend the Opposition conclave in Delhi. We should be more pliable in politics and not shut doors so soon.”