The BJP hit out at Gandhi’s wild allegations as “shamelessness and irresponsible” and blasted him for “abusing” an “honest” Prime Minister. 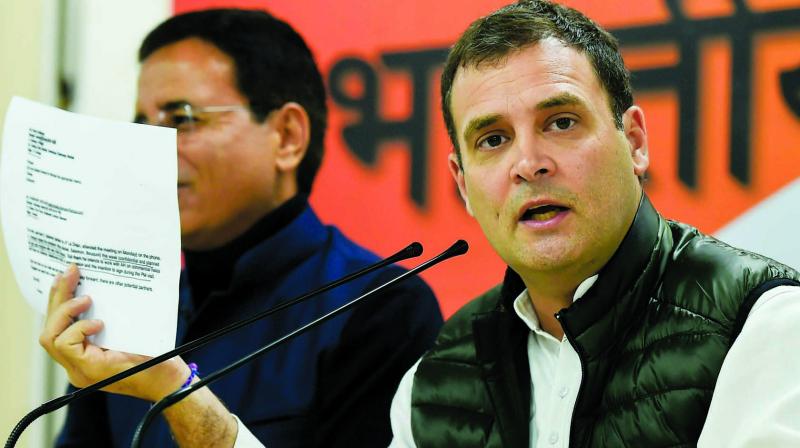 New Delhi: Continuing his attack on the Narendra Modi government over the Rafale jet deal, Congress president Rahul Gandhi on Tuesday accused the Prime Minister of “treason” for acting as Anil Ambani’s “middleman”, prompting the BJP to claim that the Congress chief is working as a lobbyist for foreign firms and that the Gandhi family has a history of “looting” the country.

Escalating the war of words between the Opposition party and the ruling BJP over the deal, Mr Gandhi released to media a copy of an email that he said revealed that the industrialist had visited Paris and met the French defence minister 10 days before the Prime Minister went there and announced the 36-jet deal with France. This, he said, was in violation of the Official Secrets Act.

“The Prime Minister has compromised national security, he has done what spies do… Mr Modi’s action puts him in jail,” Mr Gandhi said, adding that the email dated March 28, 2015, purportedly written by Airbus executive Nicolas Chamussy to three recipients had the subject line “Ambani”.

Mr Gandhi claimed the email showed Mr Ambani visited then French defence minister Jean-Yves Le Drian’s office and mentioned an “MoU in preparation and the intention to sign during the PM visit (to France)”.

The Congress president asked how Mr Ambani knew about the deal and mentioned it in the French defence minister’s office when even then foreign secretary S. Jaishankar and then defence minister Manohar Parrikar had no information on it.

The Congress president also rejected the Comptroller and Auditor General (CAG) report on the Rafale deal, and dubbed it “Chowkidar Auditor General” report.

The BJP rejected the charge, saying Mr Gandhi is relying on a wrong email that was purportedly written by an Airbus executive referring to a helicopter deal and not Rafale. Reliance Defence also took the same stand.

The BJP hit out at Mr Gandhi’s wild allegations as “shamelessness and irresponsible” and blasted him for “abusing” an “honest” Prime Minister. The ruling party also accused the Opposition party of peddling “lies” on the Rafale deal to save a “sinking dynasty” and manufacturing a new falsehood every day.

Dubbing Mr Gandhi a “lying machine”, Union minister Ravi Shankar Prasad asserted that the email shared by the Congress president referred to a chopper deal and not the Rafale purchase. He put Airbus in the dock, saying the company is under a needle of suspicion in several deals signed during the UPA era.

Mr Prasad said, “Let Rahul Gandhi explain where did he get internal email of Airbus. Who is supplying him? There cannot be a bigger thing than this that he is working as a lobbyist for foreign firms.”

In its response to Mr Prasad’s remarks, Airbus spokesperson said, “We do not comment on any ongoing investigation. We have cooperated with the Indian authorities in the past and will continue to do so.”

Another Union minister Arun Jaitley, in an article on his Facebook page, said, “How many lies are necessary to be peddled to save a sinking dynasty? The contagion effect of falsehood is fairly large. It appears to have spread to other colleagues in the Mahajhootbandhan.”

“In relation to the Rafale deal where thousands of crores of public money has been saved, a new falsehood is manufactured on a daily basis. The latest is in relation to the present CAG and his participation in the decision making process of Rafale,” he said on the eve of the tabling of CAG report on the jet deal in Parliament.

Rejecting allegations of conflict of interest of CAG Rajiv Mehrishi, Mr Jaitley said the official never dealt with any file or paper relating to the fighter jet deal during his tenure in the finance ministry in 2014-15.