I am being harassed: Jayalalithaa's niece

Apparently referring to Sasikala's camp, she said she was being harassed since she announced she would contest in RK Nagar constituency. 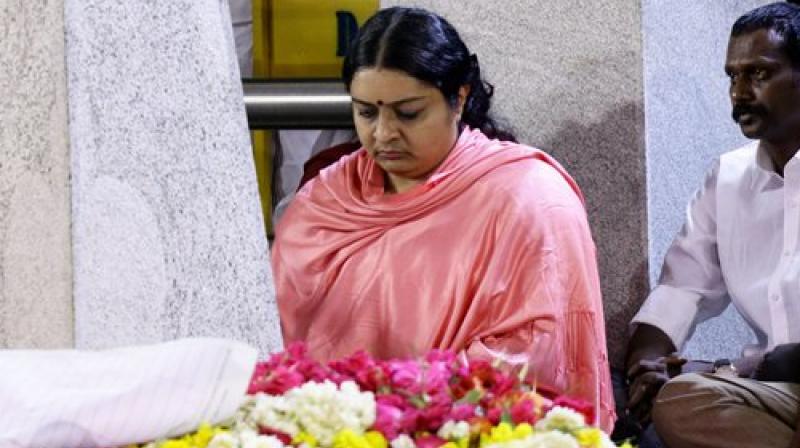 Deepa Jayakumar sitting in a meditation in front of late J Jayalalithaa's burial site at the Marina Beach in Chennai. (Photo: AP)

Chennai: Deepa Jayakumar, the niece of J Jayalalithaa, on Sunday alleged that she is being harassed to prevent her from contesting bypoll in RK Nagar Assembly seat to be held on April 12.

Apparently referring to AIADMK chief VK Sasikala's camp, she said, "Right from the day I announced that I will be contesting in RK Nagar Assembly constituency, I am being harassed in several ways indirectly."

"I could not even stay at my house and goons are being sent against me. I do not know who (goons) they are...," Jayakumar told reporters.

"Several conspiracies are being hatched to prevent me from contesting in the bypoll," she alleged.

Jayakumar alleged that she was prevented from visiting the hospital where Jayalalithaa was admitted in 2016 and was also kept away from taking part in the last rites of the leader.

In an unexpected move, she paid homage at Jayalalithaa's memorial at the Marina Beach in Chennai at around 10 PM and sat there in meditation for sometime.

Former Chief Minister O Panneerselvam had also sat in meditation on February 7 at the memorial before revolting against Sasikala.

Announcing the founding of MGR Amma Deepa Peravai on February 24, Jayakumar had said she will contest from RK Nagar Assembly constituency that fell vacant following the death of Jayalalithaa on December 5, 2016.