No wall on Pakistan border: Government

Focus on use of tech to seal border by the end of 2018, says Rijiju. 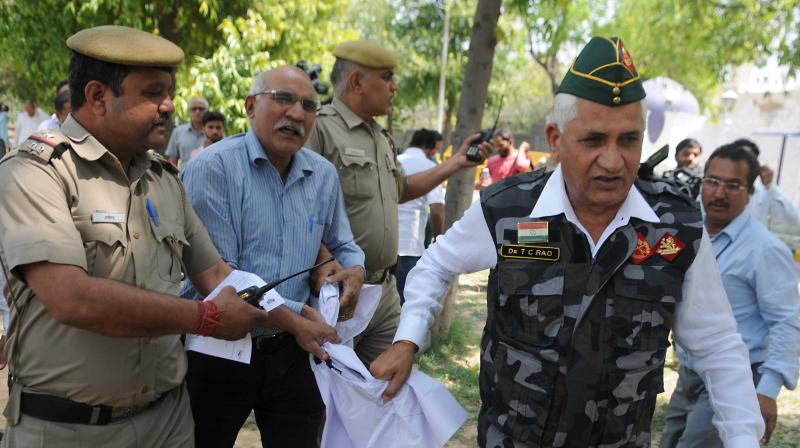 A policeman tries to take away a banner from an ex-serviceman protesting outside the Pakistan high commission in New Delhi on Wednesday for the release of former Indian naval commander Kulbhushan Jadhav, who has been awarded death sentence by a Pakistan court. (Photo: Biplab Banerjee)

New Delhi: Despite increased hostility with Pakistani, particularly in the wake of death sentence being awarded to Kulbhushan Jadhav, the government has ruled out any possibility of constructing a protective boundary wall along the Indo-Pak border.

Even minister of state for home Kiren Rijiju informed Parliament on Wednesday that there was no proposal with the government to construct a wall along the Pakistan border.

However, the Centre has been working on an ambitious plan to completely seal the border with Pakistan by the end of next year. The move was initiated after a committee headed by former home secretary Madhukar Gupta submitted a detailed report to the home ministry last year on how security parameter along the Indo-Pak border should be strengthened further. The committee was constituted after the attack on Pathankot Air Force base.

Home minister Rajnath Singh too has already discussed the issue with border states like Punjab, Jammu and Kashmir, Rajasthan and Gujarat, as both Centre and states would work jointly on the project to make the border completely foolproof. In his report, Mr Gupta had stressed on the need for greater use of technology in sealing the border.

Mr Rijiju too informed Parliament on Wednesday that the government was working on a “multi-pronged approach”’ for this purpose. For this purpose, it has been decided to increase deployment of BSF, installing more CCTVs and laser walls as well as other hi-tech surveillance equipment, constructing border fence and roads on areas which have not been covered so far and providing sophisticated equipment and vehicles for patrolling to border guarding forces.

“In fact the proposal for constructing a wall along the Indo-Pak border was never there and the focus was on greater use of technology to seal the border. May be there was a passing reference to the issue during one of the meeting but there was no formal proposal as such. Work on sealing the border has already started and we plan to complete it by end of 2018,’’ a senior home ministry official said,