Both Ali, Bajrangbali belong to us: Mayawati on Yogi's remark

Mayawati's comments come days after Adityanath had said that if Congress, SP-BSP have faith in 'Ali' then 'we have faith in Bajrangbali'. 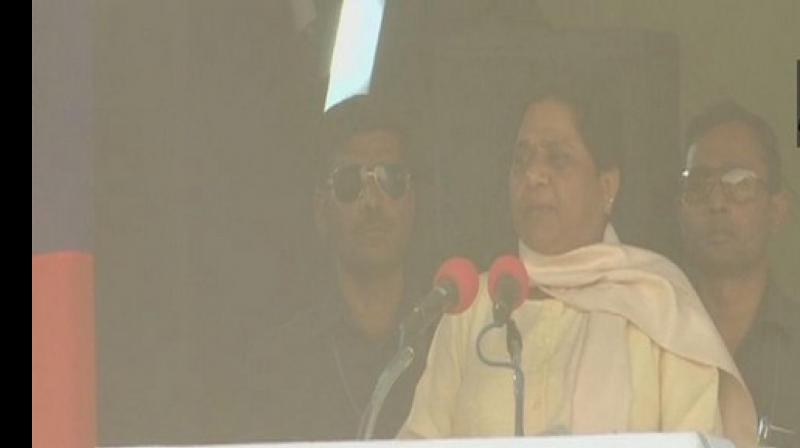 Taking a jibe at Uttar Pradesh Chief Minister Yogi Adityanath, BSP supremo Mayawati in a rally on Saturday said that the both 'Ali' and 'Bajrangbali' belonged to her party. (Photo: ANI)

Badaun: Taking a jibe at Uttar Pradesh Chief Minister Yogi Adityanath, BSP supremo Mayawati on Saturday said that the both 'Ali' and 'Bajrangbali' belonged to her party.

Mayawati's comments come days after Adityanath had said that if the Congress, SP and BSP have faith in 'Ali' then "we have faith in Bajrangbali".

While addressing a joint rally comprising SP-BSP-RLD alliance here, Mayawati said, "Ali and Bajrangbali both belong to us. I also want Bajrangbali because he has been associated with Dalit caste. This was not found out by me. This was done by the Uttar Pradesh Chief Minister himself."

On April 7, Mayawati had said in a public rally in Deoband that she called upon Muslims to vote for SP-BSP alliance, and not for the Congress party.

Mayawati's comments came under the scanner of the Election Commission. The top electoral body had even sent a notice to the BSP supremo over her remarks made in the Deoband rally, which allegedly violated the Model Code of Conduct.

Hitting out at Mayawati, Adityanath on April 9 had said in a rally in Meerut, "Mayawati in her speech says that if they get Muslim votes, then they won't need any other vote. If Congress, SP, and BSP trust Ali, then we have faith in Bajrangbali."

"They have agreed that followers of Bajranbali will never forgive them. That is why they go on stages and cry 'Ali-Ali' and they want to send a 'green virus' to bite the country," he had added.

The SP, BSP and RLD are contesting in the ongoing Lok Sabha polls in alliance in Uttar Pradesh. The RLD is contesting on three Lok Sabha seats, BSP is contesting on 38 seats and SP on 37 seats respectively. The alliance has left two seats – Rae Bareli and Amethi – for the Congress.

Badaun is a traditional bastion for the SP and polling for this constituency is scheduled to be held on April 23, the third phase of the ongoing Lok Sabha elections.

Eight constituencies in the state went to polling in the first phase of the Lok Sabha elections on April 11. In the second phase on April 18, eight seats will go to polling on April 18. Counting of votes will take place on May 23.

Uttar Pradesh has 80 Lok Sabha seats, which is the highest number of constituencies for a state, and plays a key role in the formation of a central government.