Maneka Gandhi warns Muslims: Vote for me or else...

After the row, she was served a showcause notice by the district magistrate of Sultanpur who also sent a report to the Election Commission. 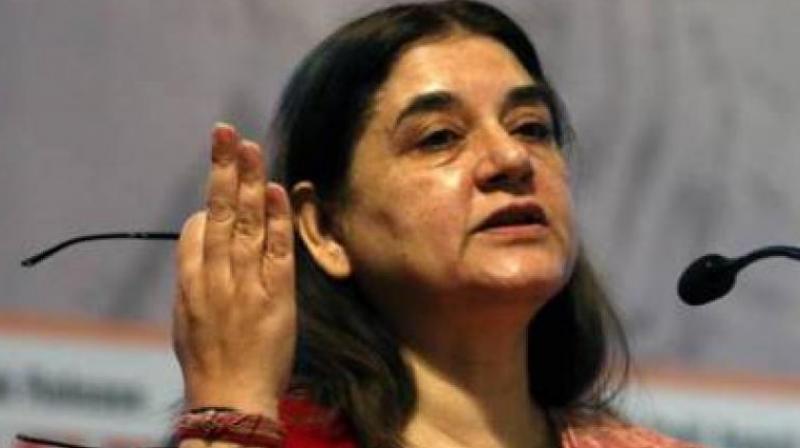 New Delhi: Kicking up a political storm, Union minister Maneka Gandhi warned the Muslim community that if they do not vote for her, she will not “help” them in future.

A video clip of her political rally in Sultanpur Lok Sabha constituency on Thursday showed the minister telling voters that it is all about “give and take”. The three-minute clip has gone viral on various social media platforms.

“I have already won this election. But now if you have to lay the foundation for getting help then this is the right time to do so,” Ms Gandhi is seen saying while indirectly coercing Muslims to vote for her.

After the row, she was served a showcause notice by the district magistrate of Sultanpur who also sent a report to the Election Commission.

Ms Gandhi later clarified that her words had been twisted. “I love Muslims and I had myself called a meeting of the BJP’s minority cell. I only meant to say that I am winning the elections and their participation would be like ‘daal pe chaunk’ (garnishing for a dish).”

The Congress reacted strongly with spokesperson Randeep Singh Surjewala saying Ms Gandhi is trying to divide people on the basis of caste and community. The Congress is likely to file a complaint against the minister in the Election Commission.

In her controversial remarks, Mr Gandhi told Muslims to vote for her as they will need her once the Lok Sabha elections are over. “We are not Mahatma Gandhi’s children that we keep giving and not get anything in return,” she said in Muslim-dominated Turabkhani area on Thursday.

“I am winning because of the help and love of the people… but if my victory is without the Muslims, I will not feel very good,” she said, adding that she will be left with a bitter feeling.

“Dil khatta ho jayega (Things will become sour). Then if a Muslim comes to me for work, I think let it be, how does it matter. It’s all give and take, isn’t it?,” she said.

“Just hear #ManekaGandhi talking to Muslims; it’s a shocker! Worse, she says ‘you will need me, and I will have booth-wise details’. #BJP ko harana hamara zimmedari hain. They are threatening our fellow Indians for votes. @ECISVEEP; Please take action ASAP!,” tweeted Congress spokesperson Sanjay Jha.

Ms Gandhi, the MP from Pilibhit, began her campaign from the Sultanpur seat about 10 days ago. The seat is currently held by her son Varun Gandhi. But in this election, Varun Gandhi has shifted to Pilibhit, a seat she won in 2009. Maneka Gandhi has won the Pilibhit seat six times.

Last week, Ms Gandhi waded into controversy when she described BSP supremo Mayawati as a “ merchant of tickets” and accused her of taking `15-20 crore from party candidates.