Behen Mayawati, be assured of woman safety in BJP: Sitharaman 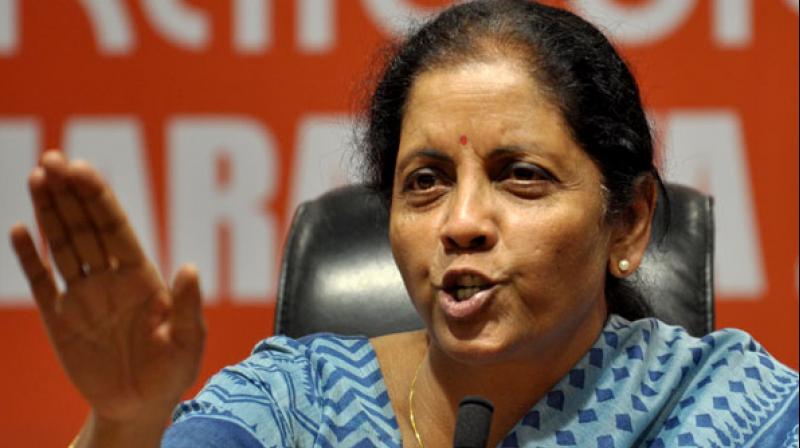 'She should really apologise for having commented so badly both on the private life of the Prime Minister and in general about all women in the BJP,' Sitharaman said. (Photo: ANI)

BJP also assured the BSP supremo that women in the ruling party are "absolutely safe, secure and have good professional relationships in the party."
Expressing shock over Mayawati's remarks, Defence Minister Nirmala Sitharaman said: "Absolutely disappointing and shocking for her (Mayawati) to speak so ill about the Prime Minister and his personal life and women in the BJP."

"Behen Mayawati, please, be assured that we are all absolutely safe, secure and have good professional relationships in our party," she told reporters here.

"She has demeaned the stature of her own leadership. Only because of this comment, this shows that she has left no respect of any position or institution of this country. She should really apologise for having commented so badly both on the private life of the Prime Minister and in general about all women in the BJP," the BJP leader.

Sitharaman also said that the statements by Mayawati were due to "her sense of insecurity" as six phases of ongoing Lok Sabha elections were concluded and she understood that 'Gathbandhan' has no scope.

"You do not have to be worried about us. Six phases of the elections are over. Now Behen Mayawati has understood that her 'gathbandhan' (alliance) is going nowhere and that is the reason for her worry, agitation and her sense of insecurity," she said.

Mayawati earlier in the day claimed that women leaders in BJP are afraid of their husbands meeting Modi, as they fear being abandoned by their husbands, just like the Prime Minister did to his wife.

Speaking to ANI, Mayawati said: "I came to know that in BJP married women are worried when they see their husbands meeting Modi as they fear that Modi may separate them from their husbands, just the way he left his own wife. I appeal to all women not to vote for Modi. This would be a true tribute to Modi's wife who was abandoned."

Mayawati also claimed that Modi left his wife for vested political gains.
Citing the gang rape of a Dalit woman in Alwar, Mayawati said that Prime Minister Modi was initially silent on the issue and spoke on it only after she raked up the matter.

"The Prime Minister remained silent on the Alwar gang rape. However, after I spoke on the matter, he started to do his filthy politics for political gains. He doesn't know how to respect the sisters and daughters of others as he has left his own wife for his vested political interests."

The BSP chief went on to claim that the Prime Minister remains silent on matters of atrocities against Dalits.

"In the case of Rohith Vemula, he never asked for resignation or clarification from his minister. He has also never offered his resignation or taken moral responsibility in any such cases of atrocities against Dalits."

She also stated that the Prime Minister has no values. "For breaking the 'gathbandhan' he referred me as respected 'Behen' ji but as soon as he got a strong reply and came to know that he will not be able to break the alliance, he started calling me 'Bua' and Akhilesh Yadav 'Babua."

A woman was allegedly gang-raped by five men while her husband was beaten up in Thanagaji area of Alwar district in Rajasthan on April 26. A video of the incident was shot by the perpetrators, who threatened to make it public if the matter was reported. The couple reported the matter to Police much later on May 2.