Prime Minister Narendra Modi claimed that people search for new words daily to 'abuse' him despite being on bail. 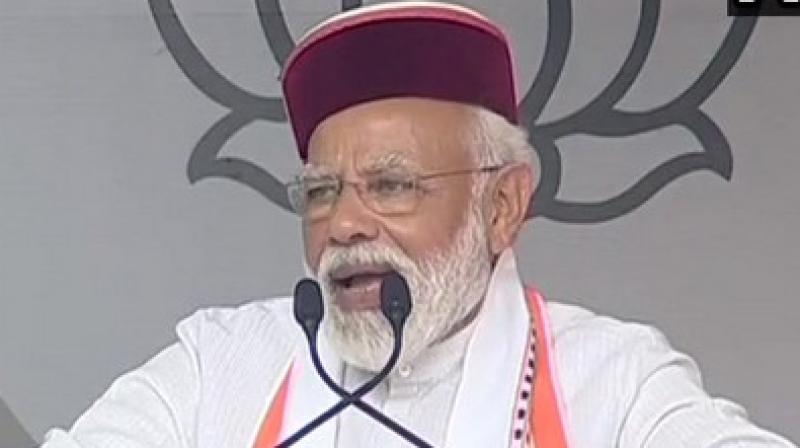 Solan: In a veiled attack on Congress President Rahul Gandhi and Sonia Gandhi, Prime Minister Narendra Modi claimed that people search for new words daily to "abuse" him despite being on bail.

Addressing a public meeting and without taking their names, he attacked Sonia and Rahul by referring to National Herald case in which both mother and son are out on bail.

Taking a potshot at them, Modi maintained that he did not budge because of Congress leaders "abuses" as he had mushrooms from Solan, an area where Priyanka Gandhi has built a home.

"Those who are themselves on bail, search new words from their dictionary daily to abuse your 'chowkidaar'. But your 'chowkidaar' is not going to budge because of their abuses, "aakhirkar humne bhi to Solan ka mushroom khaya hai" (after we have also eaten the mushroom of Solan)," Modi said.

Modi claimed that had the previous UPA government maintained the growth rate achieved during former prime minister Atal Bihari Vajpayee's term, then it would have been much higher now.

India used to depend on foreign countries for 70 per cent of the needs of the armed forces, Modi said, adding that the defence deals were ATMs for the Congress.

The prime minister also hit out at the Congress over party leader Sam Pitroda's remarks on the anti-Sikh riots, saying if anyone asked a question to the "namdaar" family, they respond "hua to hua" (whatever happened, has happened).

Modi accused the previous UPA dispensation of delaying the purchase of bullet-proof jackets for the armed forces for six years. "I request the first-time voters to vote for ensuring development," Modi added