'No work, only talk', Priyanka's attack on Modi

'Prime Minister did not have time to visit the house of a poor in Varanasi in the last five years', says Priyanka 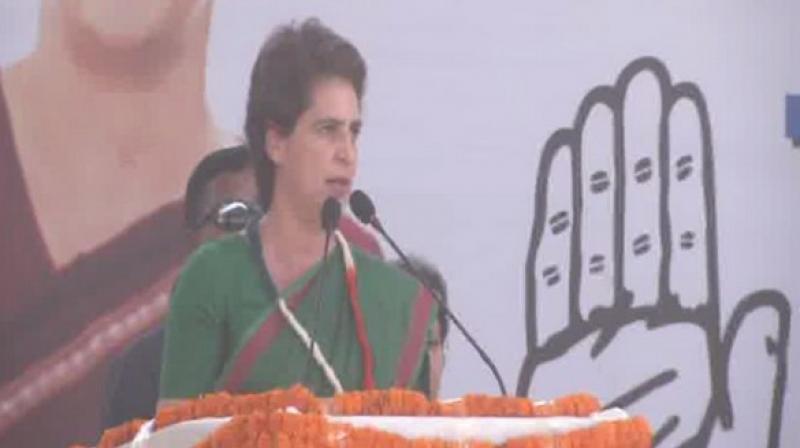 Priyanka said that free education will be provided to students till Class 12 if the party was voted to power. (Photo: AP)

Ratlam: Congress general secretary for Uttar Pradesh East Priyanka Gandhi Vadra on Monday accused Prime Minister Narendra Modi of not doing any work as he was only interested in talking in the last five years.

"There has been a strange phenomenon from 2014 to 2019. In the last five years, there has been no work. There has been only campaigning and nothing else," Priyanka said at a public rally here.

Claiming that Modi remained "silent" on the plight of farmers, Priyanka said that the Prime Minister did not have time to visit the house of a poor in Varanasi in the last five years.

"The Prime Minister does not even have the time to visit a poor's house in his own parliamentary constituency in Varanasi. He is giving big speeches on farmers. But he did not care for the farmers. He remained silent when about 12,000 farmers committed suicide," she added.

Priyanka further said, "When farmers from all states marched to Delhi and raised their issues, our Prime Minister remained silent.

They wanted to meet the Prime Minister but he did not step out from his office even for five minutes. He does not have time for the poor and farmers. He only has time to meet leaders from China, US and Japan.

Accusing Modi of "not having time" to listen to youth over not getting any employment, Priyanka said that demonetisation took away 50 lakh jobs.

Priyanka said that while Modi talks about protecting everyone, she alleged that "if he was a true nationalist, then why he did not do the same to farmers and the poor?"

Urging the people not to waste their vote, the Congress leader said, "I am the grand-daughter of Indira Gandhi. I have one request to you all. Make yourself aware and recognise your power. You have been ignored and misled in the last five years. Do not waste your vote, else you need to endure another five years of corruption and lies."

Reiterating Congress' promise of providing Rs 72,000 to 20 per cent of the country's poorest, Priyanka said that free education will be provided to students till Class 12 if the party was voted to power.

Later, Priyanka held a roadshow in Indore, where she was accompanied by Madhya Pradesh Chief Minister Kamal Nath and other leaders.

Eight Lok Sabha seats will go to polls in the last phase of General elections on May 19. Counting of votes will take place on May 23.