The sources claimed this group might be the collective leadership the party plans to propose to the Congress president. 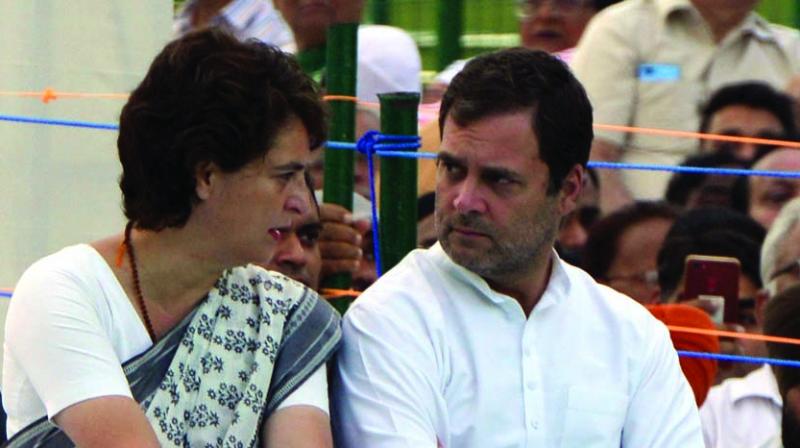 New Delhi: With Congress president Rahul Gandhi refusing to back down on his decision to quit as party president for now, a group of senior party leaders, without any member of the Gandhi family, met on Wednesday and started to chalk out a strategy for the Assembly polls in four states that are due to be held later this year.

While the Congress president is understood to be abroad, his mother Sonia Gandhi, the parliamentary party leader, and sister Priyanka Gandhi Vadra, AICC general secretary in charge of eastern Uttar Pradesh, are now on a “thanksgiving” visit to Rae Bareli.

Sources said the way the leaders met indicated that this group of senior leaders might be the informal decision-making body of the Congress till at least the Assembly polls in case Mr Gandhi refuses to change his stance.

It may be recalled that at the last Congress Working Committee meeting on May 25, Mr Gandhi expressed his resolve to quit as party president and asked the senior leadership to look for a successor who was not from the Gandhi family.

The sources claimed this group might be the collective leadership the party plans to propose to the Congress president. The leaders who met on Wednesday were part of the nine-member core group constituted by Mr Gandhi before the Lok Sabha polls. The group was headed by A.K. Antony. The party, however, said the core group had ceased to exist after the general election ended.

The Congress was virtually routed from the country, winning just 52 seats in the Lok Sabha polls, as against the BJP’s 303, failing to do well even in the three Hindi belt states of Rajasthan, Madhya Pradesh and Chhattisgarh where it had come to power just six months back.

Besides discussing prospects in the Assembly polls in Haryana, Maharashtra, Jammu and Kashmir and Jharkhand, the leaders are also learnt to have decided to tell Mr Gandhi that they have not been able to think of a suitable successor to him.

Officially, Congress’ chief spokesman Randeep Surjewala said Rahul Gandhi was and would remain the Congress president. He also said Mr Venugopal, who was secretary (organisation), would soon call a meeting of all state secretaries to deliberate on the poll debacle.

The meeting could not decide on who could be its new Lok Sabha leader after the defeat of Mallikarjun Kharge. Mr Surjewala said this decision would be taken by Mrs Sonia Gandhi, the Congress Parliamentary Party leader.