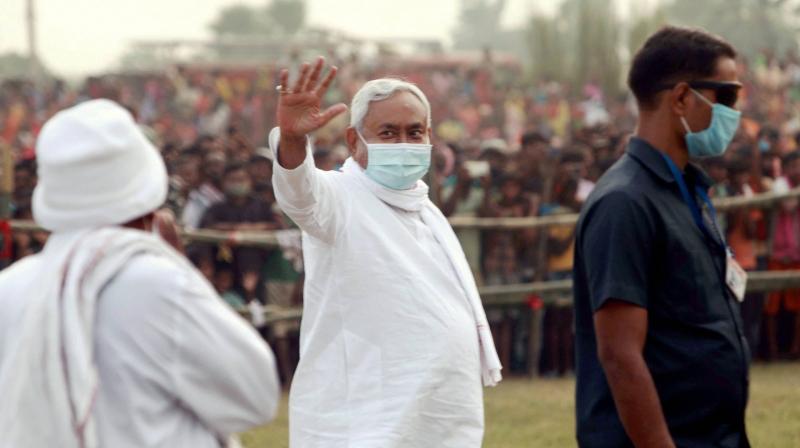 Patna: After the NDA’s victory in the Bihar Assembly elections, Nitish Kumar is all set to take the oath as Bihar chief minister for a fresh term. Sources have said the swearing-in might take place on Monday.

On Thursday he visited the JD(U) office to greet party workers and said the NDA is currently assessing the poll results and the dates for the oath ceremony has not been finalised yet. Reports suggest he is expected to meet the Bihar governor after meeting with all four NDA partners soon.

While interacting with the media at the JD(U) office, he said: “I have made no claim for the CM’s post, the decision will be taken by the NDA. It has not been decided yet when the oath ceremony is going to take place, whether after Diwali or Chhatth Puja. At the moment we are assessing the poll results and all four NDA partners will also meet on Friday.”

The NDA led by Nitish Kumar’s JD(U) has won 125 seats, three more than the number required to form the government in Bihar. Reports suggest Nitish Kumar has been upset over the performance of his party in the polls. This is the first time in 15 years that the JD(U) has slipped to number three position in the state, after the RJD and the BJP.

The RJD, with 75 seats, has emerged as the single largest party, followed by the BJP, which has won 74 seats. The JD(U) has got only 43 seats and two smaller NDA partners -- Hindustani Awam Morcha and Vikasheel Insan Party -- won four seats each.

The JD(U) has been holding Lok Janshakti Party chief Chirag Paswan responsible for the low tally and has been accusing him of “cutting votes” in most of the seats fielded by the party. On Wednesday, while talking about his party’s performance in the Assembly elections, Chirag Paswan had acknowledged it was his party’s goal to cause a dent to the JD(U) and make the BJP stronger.

Sources said the JD(U) leadership has urged the BJP to initiate action against Chirag Paswan and his party for aggressively campaigning against Nitish Kumar and fielding candidates in most seats where the JD(U) had fielded its candidates. As per an assessment, the LJP harmed the JD(U) in 20-30 seats during the polls. “It’s the BJP which has to decide whether any action is to be taken against him (Chirag Paswan) or his party. It’s for the BJP to decide whether or the LJP should remain in the NDA”, Mr Nitish Kumar said.