Rahul: Is Hinduism about beating Sikhs, Muslims: No, Hindutva is

'We have to accept that the BJP-RSS has spread hatred in today's India,' said Gandhi 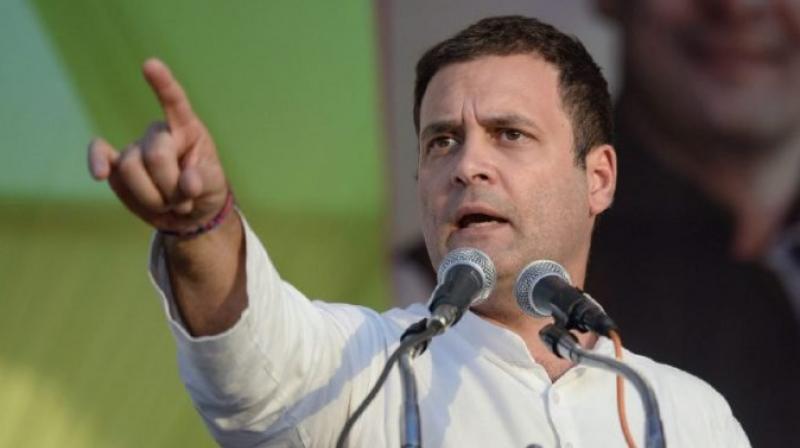 Wardha/New Delhi: “Is Hinduism about beating a Sikh, or a Muslim?” Of course not, but Hindutva is, Congress leader Rahul Gandhi said on Friday in an address to his party workers and leaders, irking the BJP which has been trying to present Hindu religion and the political ideology of Hindutva as one and the same.

Addressing a four-day All India Congress Committee (AICC) orientation programme in Sevagram Ashram, Wardha, Mr Gandhi drew a clear distinction between Hinduism and the RSS-BJP’s Hindutva, saying that the Congress’ ideology is like a "beautiful jewel" with unending power, while the ruling party’s ideology was being used to spread “hatred”.

The Congress leader said in today's India, the ideological fight has become very important and urged party leaders to learn themselves and train others in what it means to be a Congress leader.

"We have to accept that there are two ideologies in India - the Congress ideology and the RSS ideology. We have to accept that the BJP-RSS has spread hatred in today's India,” Mr Gandhi said, and added, "The Congress ideology… the ideology it follows has been existing in India for thousands of years. Just like the RSS has its icons, the Congress has its own icons… It is our strength… it is why we exist and it is important we discover it. They (BJP) have discovered their ideology and crystalized it. We have to crystalize our ideology and the moment we do that it will envelope their ideology. The hate that is being spread today will vanish and the future which seems uncertain will become certain.”

Recalling his conversation with former Uttarakhand minister Yashpal Arya, who returned to the party fold last month, Mr Gandhi said Arya told him for a Congressman, it is very suffocating to survive in the BJP.

His comments come ahead of crucial Assembly polls which usually see a lot of movement of leaders from one party to another. Elections are due in five states, including Uttar Pradesh, in 2022.

The BJP’s national spokesperson, Sambit Patra, alleged that Congress and its leaders “mistrust” Hindu religion. Ignoring the distinction between Hindutva and Hinduism, he said, “Mr Gandhi’s remarks as revealed by WikiLeaks in 2010 had hurt the nation when he had said that Hindus were bigger threat than terrorism and how he had said (later) that Congress was a party of Muslims… Salman Khurshid compares Boko Haram and ISIS with Hinduism… Shashi Tharoor says 'Hindu Taliban'. Leaders like Digvijaya Singh and Mani Shankar Aiyar use words like 'saffron terrorism' against Hinduism. This is no coincidence. It is Rahul Gandhi, the leader, who has taught others to make such statements against Hinduism.”

“We say there is a difference between Hindutva and Hindu religion. It is a simple logic -- if you are a Hindu then why do you need Hindutva? Why do you need this new name?… Is Hinduism about beating a Sikh or a Muslim? Hindutva, of course, is," the Congress leader told the gathering during his virtual address.

Mr Gandhi admitted that the Congress did not propagate its ideas properly and that its ideology has been overshadowed by the BJP.

“Ideologically training of party workers, in my view, should be made mandatory irrespective of seniority… The Congress ideology, if studied and propagated deeply in the organisation, has answers to all questions related to various issues of public concern — ranging from Article 370, terrorism to nationalism,” Mr Gandhi said.

“These are the types of things we need to explore and develop… 100, 200, 300, 500 people who deeply understand these differences, who can apply these differences to issues, behaviour, to action,” he added.