Former CM Prithviraj Chavan said people had voted against the ‘anti-farmer, anti-poor, anti-tribal and anti-Dalit’ policies of the BJP. 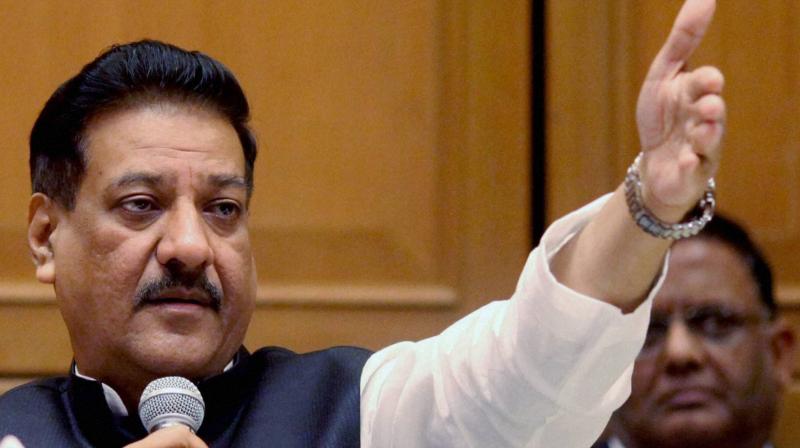 ‘Farmers consumed poison, hanged themselves and even lit their own pyres. This has never happened earlier, which reflects the gravity of the situation. But the government is not even ready to recognise this,’ former CM Prithviraj Chavan said. (Photo: PTI)

Mumbai: Maharashtra Congress chief Ashok Chavan on Thursday blamed the "wrong policies" of the BJP-led government for a "severe" farm crisis in the state, and called for a grand alliance of like-minded parties to dislodge the saffron party.

He said Maharashtra has witnessed the highest number of farmers suicides.

"Farmers consumed poison, hanged themselves and even lit their own pyres. This has never happened earlier, which reflects the gravity of the situation. But the government is not even ready to recognise this," Chavan told PTI.

The former Maharashtra chief minister added that the Congress was very clear that loan waiver was a short-term proposal, which needed to be implemented if required.

Chavan added that long-term policies for minimum support price (MSP), input cost of fertilisers, seeds, crop insurance, climatic conditions have been worked out by the party in the states, which went to polls recently, and the assurances will be implemented in Maharashtra as well.

"What was the need to import sugar from Pakistan? The prices of sugar here crashed. The wrong policies of the NDA government was hurting the farmers," he said.

"There is a requirement of a dynamic policy, which needs to be addressed on a daily basis to empower farmers economically," he added.

Chavan said the BJP's success in local bodies polls was not a measure for the Assembly and Lok Sabha polls.

"This state government is the most corrupt. It has poured money into the local bodies poll campaign. This was not a level-playing field...For the Lok Sabha and Assembly elections, our priority is choosing the right candidates at right places and getting the right alliances," he said.

Stating that Maharashtra was a multi-party polity with four major parties eyeing for equal vote base, Chavan said Congress was in alliance with the NCP for 15 years.

"I admit that in certain sections of the state our presence is dependent on the NCP and vice versa. This is because of 15 years of alliance. Whether this is right or wrong...it is not the time to comment now," he said.

Chavan added that the key to success would be a mega-alliance of like-minded parties in the interest of the state and the country. "The mega-alliance is in the pipeline. We have had successful talks on seat-sharing alliance with the NCP. Only 10 per cent issues are pending, which can be sorted out.

"Talks with CPI, CPM, Peasants and Workers Party (PWP), Samajwadi party (SP), Swabhimani Shetkari Sanghatana (SSS) even Prakash Ambedkar have been positive. We are hopeful that we will be able to prevent division of votes," he said.

According to him, expectations of smaller parties were not high. "They have certain pockets of influence like PWP in Raigad, communists in Palghar and Nashik, Raju Shetti in Ichalkranji...they will be given their due share," he said.

Ruling out the possibility of accommodating the Raj Thackeray-led MNS in the grand-alliance, he said the Congress had ideological differences with the party.

When asked about NCP chief Sharad Pawar visiting former minister Narayan Rane, he said he was not aware of the speculations that the NCP was keen to include Rane in the grand alliance, if he quits the NDA.

"Rane has quit the Congress to join BJP. So where is the question of talking to him?" he asked. Referring to the assembly poll results, Chavan said it has proved that people were not in favour of the BJP any more.

"Congress has won in three and lost in two (states), but in all the five states, the BJP has lost miserably," he said.

Chavan said people had voted against the "anti-farmer, anti-poor, anti-tribal and anti-Dalit" policies of the BJP.

"People have realised that the BJP focused on false and hollow promises. The atmosphere of fear, threatening of business community and opposition by blatant use of CBI, ED and IT have proved counter-productive. People have rejected the authoritarian and centralised rule of Prime Minister Narendra Modi," he claimed.