India is a country of Hindus, not Hindutvadis, says Rahul Gandhi 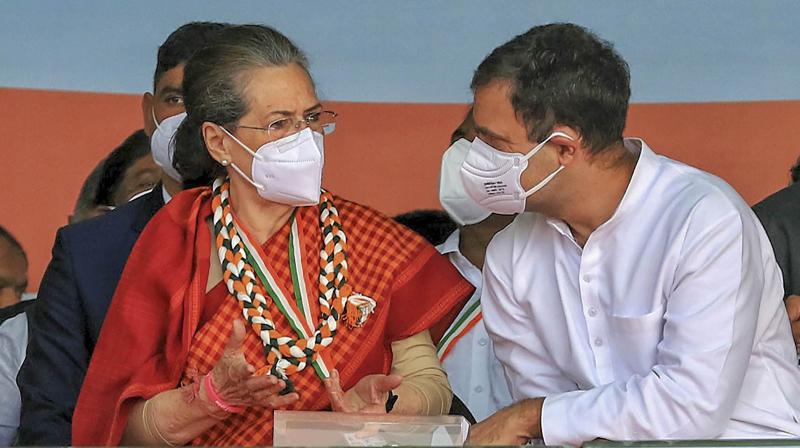 Jaipur: Congress leader Rahul Gandhi on Sunday said India is a country of Hindus and not Hindutvadis who want to be in power at any cost. Mahatma Gandhi was a Hindu and Godse was Hindutvadi, the Congress leader said, stressing that a Hindu continuously searches for truth, just like Mahatma Gandhi. But, in the end, one Hindutvadi fired three bullets in his chest, Mr Gandhi said.

Addressing a rally against rising inflation, Mr Gandhi slammed the Center over unemployment, saying it is the highest in the past 60 years.

He said if there is inflation in the country and there is suffering, then this has been done by Hindutvadis and targeted Prime Minister Narendra Modi, saying, "Modiji and his three-four industrialist friends ruined the country in seven years."

Congress general secretary Priyanka Gandhi Vadra also addressed the rally and slammed the Modi-led Union government, saying it wants to sell to its industrialist friends whatever the Congress had built in 70 years.

Congress president Sonia Gandhi was also present at the rally but she did not address it.

Punjab CM Charanjit Singh Channi arrived late at Jaipur and did not go to the rally venue. He met Sonia Gandhi and Priyanka while they were returning.

A Hindu is one who is not afraid of anyone, embraces everyone and respects all religions, the Congress leader said.

"Hindutvadi spends his entire life for power and he has nothing to do with truth. He only wants power and he can do anything for that, whether he has to beat or kill someone… His way is Sattagrah and not Satyagrah," Mr Gandhi said.

"On the contrary, Hindu faces his fears and does not step back even one inch.  Fear drowns Hindutvadi and this fear creates hatred in his heart whereas a Hindu's heart contains love and strength," the Congress leader said.

"I am Hindu and not Hindutvadi," he added.

The Congress leader said Hindutvadis have to be "ousted" once again and the "rule of Hindus" have to be brought in the country.

Referring Hindu epics, he said nowhere is it written to kill and suppress the poor.

"Be it the Ramayana or Gita, tell me where it is written that the poor has to be killed and downtrodden has to be crushed. Lord Krishna did not tell Arjun to kill brothers for power. It is written in the Gita that you fight for the truth even if you have to die," he said.

He also alleged that 90 per cent of the corporate profit in the country is with 20 companies.

Pointing out at mediapersons, he said those who will broadcast the rally are also their "slaves".

However, he said they are not Hindutvadi but Hindus who have been suppressed.

"But Hindus cannot be suppressed. It did not happen in 3,000 years and it will not happen now. We are not afraid of dying," he said.

Gandhi said Congress governments waived loans of farmers because they are the backbone of the country but Mr Modi "stabbed them in the back".

"He did not stab from the front, he stabbed in the back because he is Hindutvadi. When Hindu farmers stood up, Hindutvadi said I apologise," said Mr Gandhi attacking the PM.

He said PM Modi had promised good days but the good days have come only for Adani and Ambani.

"But it is not their fault. It is the fault of the prime minister who everyday thinks of giving something to them," he said.

Mr Gandhi said 33 per cent of money in the country is possessed by 1 per cent of the population and only 6 per cent money is with 50 per cent population.

“Mr Modi waived taxes of industrialists during the coronavirus pandemic but could not provide even buses to labourers who had to walk for hundreds of kilometres, and 100-200 of them died on roads,” he said.

The GST, demonetisation and lack of support from the government to small and medium scale businessmen caused it, Rahul claimed.

"Jobs cannot be generated by two-three industrialists. Jobs are generated by lakhs of small and medium businessmen and farmers," he said, adding that the unorganised sector shrank under the current regime.

He also alleged that China occupied Indian land in Ladakh and Arunachal Pradesh but PM Modi said nothing happened.

In Her speech, Priyanka Gandhi alleged that the government is working for select industrialist friends instead of working for the good of people and farmers.

"The target of the present central government is lies, greed and loot," she alleged.

She said when elections come, BJP leaders talk of China, casteism and communalism but not about the struggles of people and asked what the Modi government has done in seven years of its rule