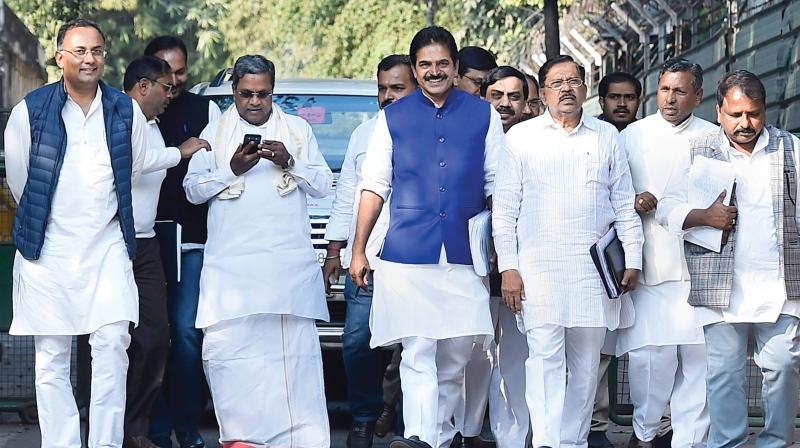 New Delhi: With Hindutva emerging as the main poll plank for BJP and Congress in Karnataka, state chief minister Siddaramaiah, along with other senior Congress leaders of the state, on Saturday met Congress chief Rahul Gandhi at his residence.

The meeting comes in the wake of a verbal duel between Mr Siddaramaiah and BJP president Amit Shah. Karnataka is likely to witness election in April-May.

The Karnataka chief minister was in the national capital to discuss the party’s poll preparedness and strategy at a meeting called by Congress president Rahul Gandhi, which lasted for about three-and-a-half hours.

Mr Gandhi is scheduled to launch the first leg of his party’s poll campaign in Karnataka on February 10-12. The state is expected to go to the polls in March-April.

Mr Siddharamaiah said, “The BJP “has nothing to talk about” and “raising irrelevant issues”. That (Hindtva) is the only issue they have. Yogi Adityanath and Amit Shah are also raising the same issue and Narendra Modi may also raise the same issue. But the Congress will go to elections with development plank.”

This was the first meeting called by the Congress president on the Karnataka polls after last month’s Gujarat Assembly election.

Mr Siddaramaiah said the party’s poll preparedness was reviewed in detail at the meeting and its strategy chalked out.

“He (Gandhi) is very happy with the functioning of the party (in Karnataka) and the (state) government. Our government is not facing any anti-incumbency. We will win the upcoming polls with a comfortable majority,” he added.