Another minister quits in UP as BJP denies ticket 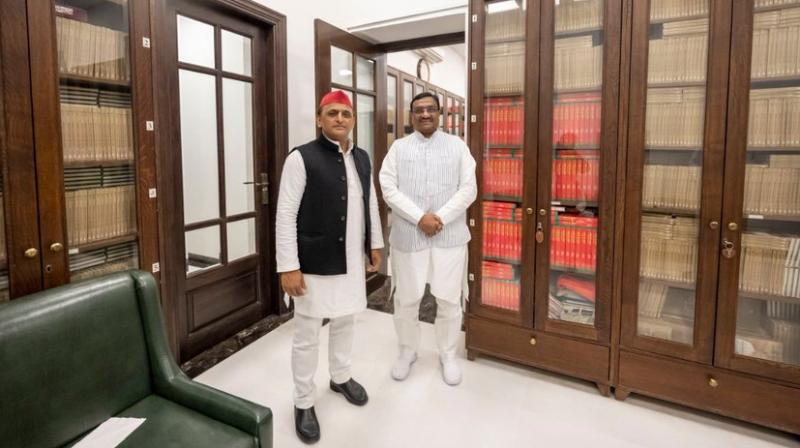 Though none of the leaders who have quit the BJP have so far officially joined the Akhilesh Yadav-led Samajwadi Party. (Twitter)

New Delhi: A third OBC minister, Dharam Singh Saini, on Thursday resigned from the Yogi Adityanath-led BJP government in Uttar Pradesh, as Sikohabad MLA Mukesh Varma too walked out of the saffron party. OBC leaders Swami Prasad Maurya and Dara Singh Chauhan had earlier quit the Yogi Adityanath Cabinet on Tuesday and Wednesday respectively. Though none of the leaders who have quit the BJP have so far officially joined the Akhilesh Yadav-led Samajwadi Party, the SP chief tweeted a picture of himself with Saini, who claimed that one minister and one MLA each from the BJP will quit each day till January 20.

However, there is growing resentment within the SP over the “thok main entry” (entry in bulk) of “outsiders” as it will dent the chances of many in the party to get tickets.

Meanwhile, the first meeting of the BJP’s central election committee (CEC) for the coming polls in five states met at the party headquarters in New Delhi. “Had a very fruitful discussion regarding candidates for 172 Assembly seats (in Uttar Pradesh). We are hopeful of registering a glorious victory in the 2022 Assembly elections,” said UP deputy chief minister Keshav Prasad Maurya, who was present at the meeting. Union ministers Amit Shah, Anurag Thakur and Dharmendra Pradhan and UP Chief Minister Yogi Adityanath also attended the meeting attended “virtually” by Prime Minister Narendra Modi, BJP president J.P. Nadda and defence minister Rajnath Singh.

The party will release the list of candidates soon.

Elections for 403 Assembly constituencies in Uttar Pradesh will be held in seven phases starting February 10.

The BJP, sources said, also finalised the seat-sharing formula with its key allies in UP -- Apna Dal(S) and Nishad Party. Both allies will contest more seats than they did in the last Assembly polls, but some of their candidates will now contest on the BJP’s poll symbol. Not just the BJP, two MLAs of its ally Apna Dal(S) -- R.K. Varma and Chaudhary Amar Singh -- have also quit.