The Congress president alleged that the only reason for the new deal is to give Rs 30,000 crore to industrialist Anil Ambani. 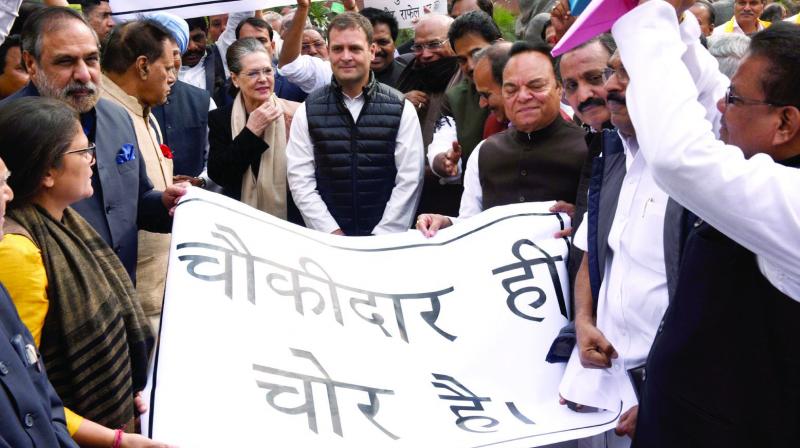 Congress chief Rahul Gandhi, UPA chairperson Sonia Gandhi and other party leaders during a protest over the Rafale deal at Parliament House in New Delhi on Wednesday. (Photo: Asian age)

New Delhi: Taking on the government over the controversial Rafale jet deal yet again, Congress president Rahul Gandhi on Wednesday said that the Comptroller and Auditor General (CAG) report on the defence deal does not mention the dissent note put in by negotiators.

Mr Gandhi claimed that he didn’t think the report is worth the paper it is written on and said that the government’s argument on price and faster delivery of Rafale fighter jets has been demolished.

The Congress president alleged that the only reason for the new deal is to give Rs 30,000 crore to industrialist Anil Ambani.

“The argument given by the prime minister for the new Rafale deal was price and faster delivery. This has been demolished,” he added.

Mr Gandhi questioned why the government was not ordering a JPC if they were sure that there was no scam. Both the government and Mr Ambani have refuted allegations of any wrong doing in the Rafale deal.

Reliance Defence, in a statement, has also refuted Mr Gandhi’s allegation saying the “proposed MoU” mentioned in the email referred to its cooperation with Airbus Helicopter.