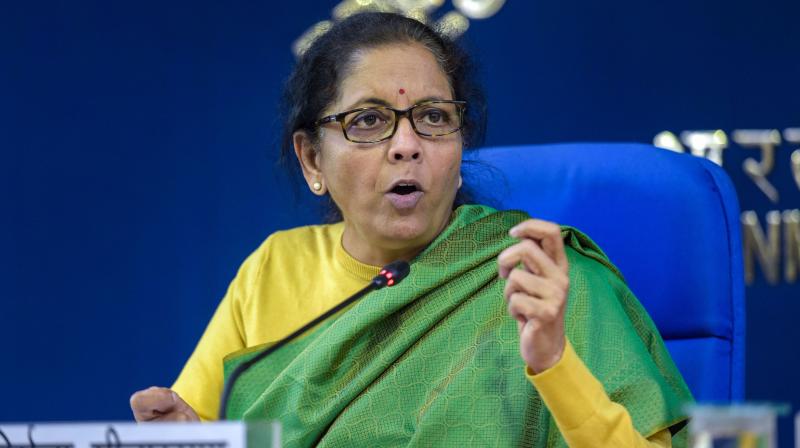 New Delhi: Finance Minister Mrs Nirmala Sitharaman, on Saturday came back strongly on the critics and Opposition who have been accusing the Narendra Modi government of `crony capitalism’, ignoring the poor and mishandling the farmers' protest.

Responding to the points made by Opposition MPs during the discussion on the Union Budget in the Lok Sabha, the Finance Minister singled out the Congress party and its leader Mr Rahul Gandhi who has been regularly hitting out at the government. Mrs Sitharaman said Mr Gandhi is probably becoming "Doomsday Man for India".

Mr Gandhi has repeatedly attacked the Centre on multiple issues, including the farmers' protests and the China standoff, and while participating during a discussion on the Union Budget on Thursday, he accused the government crony capitalism saying its policies are meant to benefit the rich.

Responding to the allegations, the FM said, “In spite of what we are doing for the poor and the steps taken for helping the poor and needy of this country...a false narrative is created…Who are our cronies? Our cronies are the common 'janta' (people) of this country. We don't do work for any cronies, we work for the common citizen who believes in the Prime Minister. Where are the cronies? They are hiding probably in the shadow of that party which has been rejected by the people… The shadows, who were invited to even develop a port. No open tenders, no global tenders. These tendencies of the Congress makes it clear their belief in a democratic system is finished. He (Rahul Gandhi) is probably becoming a Doomsday Man for India," she added.

Her remarks irked the Congress party and sources said its members have moved a privilege motion against the FM.

Responding to Mr Gandhi's “Hum do, Hamhare do" comment Mrs Sitharaman brought the reference of Mr Robert Vadra terming him as "damaad".

"It would have been nice if he (Mr Gandhi) who talked about "Hum do Hamhare do" also talked about damaads returning land.. but didn't say anything about this," she said while referring to investigations into land deals involving Mr Vadra.

Defending the government on the contentious farm laws, the FM said nothing has been done so far that would adversely affect the farmers. She accused the Congress for misguiding the farmers and changing its previously held position on the issue.

"I wanted to know from the Congress why it took a U-turn on the farm laws but no reply came," she said, adding that Mr Gandhi had failed to explain why the Congress ruled Rajasthan, Madhya Pradesh and Chhattisgarh did not waive farm loans as promised in their manifestos.

"Have APMCs been closed after the introduction of the Farmers Act? He (Mr Gandhi) was speaking like they had been. They (the new laws) are also helping improve the condition of APMCs. He (Mr Gandhi) is insulting everyone... whether President, Prime Minister or Speaker... constantly lying and insulting the country," Ms Sitharaman said.

"The PM SVANidhi Yojana, for those who constantly accuse us of dealing with cronies, doesn't go to cronies. Damaads get land in states which are governed by some parties - Rajasthan, Haryana once upon a time," she said.

The FM said that the government, undeterred by the COVID-19 pandemic, has been pursuing reforms for achieving sustained long-term growth in a bid to make India one of the top economies of the world in the coming decades.

Hitting at the economic models adopted by the Congress regime in the past, the Finance Minister said India used to follow a model based on proximity with some country or other. "We (Congress) were socialist at one particular point of time, communist at another point of time, licence quota, crony capitalism another point of time, and finally even opening of Indian economy, it was us," she quipped.

However, she said, BJP since Jan Sangh days believed in Indian entrepreneurial skills, Indian managerial skills and Indian trade skills. “Unless business creates wealth, the government has nothing to distribute to the poor and migrant labour,” she said, adding, wealth creators, honest taxpayers are, therefore, respected in the country.