55 seats in 9 west UP districts to vote in Phase 2 today; 4 ministers in fray

After the second phase on Monday, almost one-fourth of seats in the state -- 113 out of 403 -- will have voted 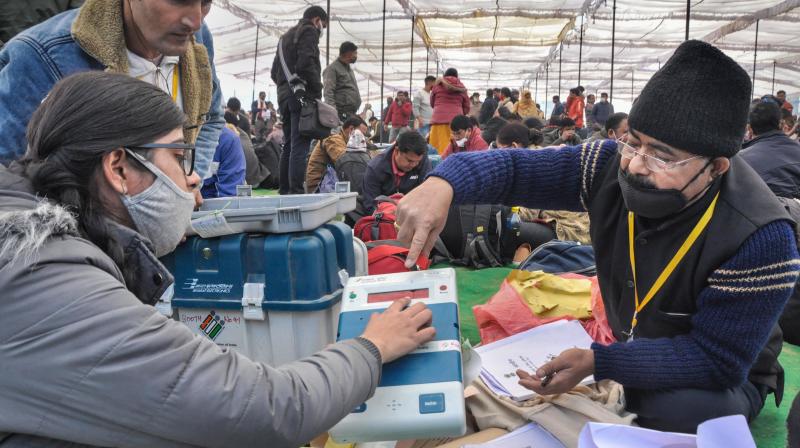 New Delhi: Moving with a strong security pitch, the BJP is all set to wade into the second phase of polling in Uttar Pradesh on Monday.

Leading the attack on the Opposition parties, Prime Minister Narendra Modi said that after the first round of voting in Uttar Pradesh, “their dynasts are sleepless and unable to dream anymore”. He added that the BJP government has the antidote for rioters and the mafia. The voting on February 14 is for 55 Assembly seats spanning the nine districts of Amroha, Bareilly, Bijnor, Badaun, Moradabad, Rampur, Saharanpur, Sambhal and Shahjahanpur in western Uttar Pradesh. This is traditionally a region where the Samajwadi Party has done well. In the last Assembly election, the SP got 27 seats. It was then in an alliance with Congress.

A buoyant Samajwadi chief, Akhilesh Yadav, claimed that the “wipeout of the BJP has already begun” after the first phase of voting. The SP-RLD combine is hoping that the farmers’ protests against the three repealed farm laws will find resonance in these districts. Four ministers in the Yogi Adityanath Cabinet -- Mahesh Chandra Gupta, Gulab Devi, Suresh Khanna and Baldev Singh Aulakh -- will test their luck this time. Senior SP leader Azam Khan, who is now in jail, is contesting from Rampur.

Congress has fielded Nawab Kazim Ali Khan against Azam Khan. Supriya Aaron of the Samajwadi Party from Bareilly Cantonment, Keerat Singh Gurjar from Gangoh and BJP’s Devendra Nagpal from Naugawan seat are in the fray.

Muslim voters have a decisive say in 25 seats while Dalit voters hold the key to some 20-odd Assembly seats in this phase. Saharanpur, Moradabad, Sambhal, Bijnor and Rampur are Muslim strongholds while nine constituencies are reserved for the Scheduled Castes. The SP-RLD is banking considerably on the consolidation of Muslim and Dalit votes, embellished with Jat and Yadav votes. The trouble for the alliance maybe if the Muslim vote is split between the Congress, BSP and the new contender, AIMIM, led by Asaduddin Owaisi. Insiders claim that after the anti-CAA protests, the Muslim votes will consolidate behind the strongest Opposition candidates -- that is the SP-RLD alliance. The alliance partners are heavily banking on this.

AICC general secretary Priyanka Gandhi Vadra, who is leading the Congress campaign, has released three manifestos of the party in the state catering to all sections of society. Apart from this, she has also undertaken several door-to-door campaigns, roadshows and rallies.

However, Congress got a shock when its declared candidate, Ms Supriya Aaron, shifted to the Samajwadi Party in Bareilly. BSP supremo Mayawati has also declared 40 per cent Muslim candidates in this phase as the BSP also wants to have the Muslim vote coming its way, but its lacklustre campaign, compared to that of the BJP and the SP-RLD, may not help it to gather much support.

After the second phase on Monday, almost one-fourth of seats in the state -- 113 out of 403 -- will have voted. There will be five other phases left, and the counting will take place on March 10.