India   Politics  14 May 2019  Every Kashi resident is contesting on mybehalf: Modi
India, Politics

Every Kashi resident is contesting on mybehalf: Modi

Modi outlined his personal and emotional association with the city and its people in a video released by his website on Monday. 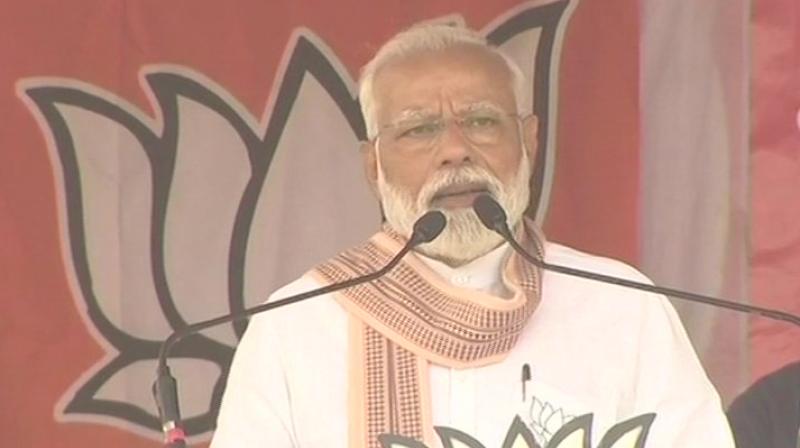 New Delhi: Calling himself a 'Kashi vaasi'- resident of Varanasi, Prime Minister Narendra Modi, who is seeking re-election from the Lok Sabha seat, issued an emotional message for people of the constituency and sought their blessings for victory.

Modi outlined his personal and emotional association with the city and its people in a video released by his website on Monday.

"It is often said that whosoever come to Kashi even once, becomes part of the city. In the last five years, I have experienced this every passing moment. In moulding me and giving a direction to my political and spiritual being, Kashi has a huge influence on me," Modi said.

Modi underlined that Kashi is not a mere word for him, but an inspiration, in terms of religion, spirituality, and culture. "I am fortunate that its people provided me with an opportunity to serve," he said.

The Prime Minister further spoke about the presiding deity of the city- Lord Kashi Vishwanath and said it is a matter of satisfaction for him to be in service of the city.

Asserting that he is proud of people's participation in the development of Varanasi in the last five years, Modi added that it serves as an example for the whole country. He also outlined various developmental initiatives undertaken in the city during his tenure.

"Be it houses or toilets, free LPG or electricity connection, Varanasi has presented an ideal example of development in all sectors. Artisans were able to get global exposure for their products through Deendayal Hastkala Sankul. Construction of two new cancer hospitals provided relief to not only people of Varanasi but also of nearby areas. Every attempt has been made for the welfare of farmers, traders, businessman, youth and 'mallahs' (boatmen) of Kashi," said Modi.

He also spoke about road and highway construction and makeover of Manduadih railway station and multi-model terminal on river Ganga, and called them "major infrastructural changes".

The city's parliamentarian termed the construction of the new Kashi Vishwanath corridor as a "makeover" while adding that it will be a subject of awe.

Modi also stressed upon Kashi's significance and said a lot of work is still left to be do be done. "In last five years, we have done a lot of work for Kashi but a lot is still left. We have to do this together. It is our vow that we will not let the speed of this development stop," he remarked.

In what sounded like a hint that he will not be campaigning in the constituency ahead of voting day, the Prime Minister said, "This time when I came for the roadshow, you assured me that you will handle everything. I have faith in every word. For me, those words are a promise. I know that every resident of Kashi is fighting elections for and as Narendra Modi."

He urged people to go for early voting and avoid the scorching summer sun and asked them to celebrate the exercise as a festival.

"Everyone must participate in the biggest celebration of democracy. You should also encourage your friends and relatives to vote. The whole country will be looking towards Kashi on that day. Go out in large numbers, wear your traditional clothes, and celebrate the day of voting with joy and fervor. Kashi has to make a new record now when the whole country is looking up to it. The record of the whole country should be broken by Kashi," Modi said.

Referring to himself as a 'Kashi vaasi', Prime Minister concluded his address with chants of 'Har Har Mahadev' and 'Har Har Gange'.

Modi held a massive road-show in Varanasi before filling his nomination on April 26.

The highly-priced Lok Sabha constituency will vote on May 19, the last phase of national polls with results scheduled for May 23.