India   Politics  14 May 2022  State of economy cause of 'extreme concern': Chidambaram
India, Politics

State of economy cause of 'extreme concern': Chidambaram

P Chidambaram said taking into account global and domestic developments, it may be necessary to contemplate a reset of economic policies 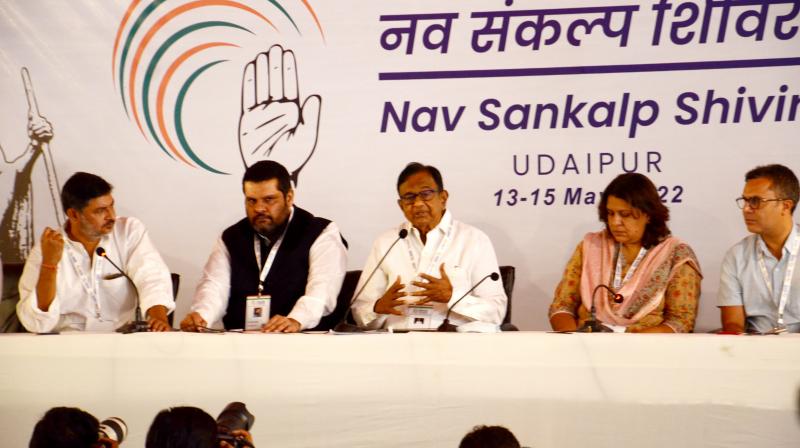 Udaipur: Asserting that the state of the economy is a cause of "extreme concern", senior Congress leader P Chidambaram on Saturday said taking into account global and domestic developments, it may be necessary to contemplate a reset of economic policies.

Addressing a press conference, Chidambaram said a slower rate of growth has been the "hallmark" of the present government in the last eight years, and the post-pandemic recovery has been "indifferent and halting".

Chidambaram, who heads the panel on economy constituted by Congress president Sonia Gandhi to lead discussions at the three-day 'Chintan Shivir' here, also said the time is ripe for a comprehensive review of fiscal relations between the Centre and the States.

The consequences of the poorly drafted and unfairly implemented GST laws brought in by the Modi government in 2017 are there for everyone to see, the Congress leader said.

"The States' fiscal position is fragile like never before and needs urgent remedial measures," said the former finance minister, flanked by some other members of the panel such as Gourav Vallabh and Supriya Shrinate.

Noting that the Congress-led government ushered in a new era of liberalisation in 1991, Chidambaram said the country has reaped enormous benefits in terms of wealth creation, new businesses and new entrepreneurs, a huge middle class, millions of jobs, exports and lifting 27 crore people out of poverty during a 10-year period.

"After 30 years, it is felt that taking into account global and domestic developments, it may be necessary to contemplate a reset of the economic policies.

"A reset of economic policies must also address the questions of rising inequalities, extreme poverty among the bottom 10 per cent of the population, India's rank in the Global Hunger Index 2021 (101 out of 116 countries), and evidence of widespread nutritional deficiency among women and children," he said.

The external situation has added to the pressures on the economy, he noted.

"The government appears clueless on the ways to deal with these developments," he added.

Chidambaram further said, "I am confident that our deliberations over three days and the decisions that will be taken by the CWC in the days and weeks ahead will make a significant contribution to the nationwide debate on the economic policies that will best serve the interests of the country and its people."

The discussions at the 'Chintan Shivir', which began on Friday, will continue on the second and third day as well and the conclusions will be recorded in the form of a declaration. A draft of the declaration will be discussed at the Congress Working Committee (CWC) meeting to be held here on the third and last day of the conclave.