No shame in saying sorry, Mamata should apologise to doctors: Aparna Sen

‘Mamata Banerjee has done so much for Bengal, but I am sorry to say that I do not support the way she spoke to the doctors,’ Sen said. 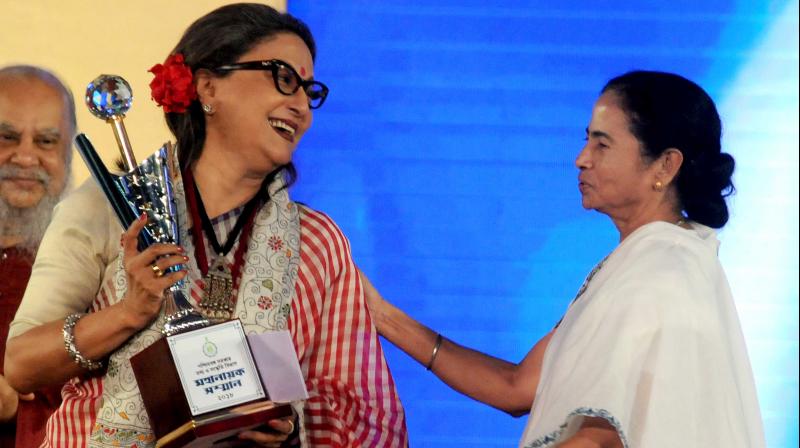 ‘I do not think the CM is totally wrong. I can understand that the opposition is trying to gain an advantage of the situation,’ filmmaker Aparna Sen also said. (Photo: Abhijit Mukherjee)

Kolkata:  Asserting that Chief Minister Mamata Banerjee should have been humble in her approach at the SSKM hospital, actor-filmmaker Aparna Sen on Friday insisted that the TMC supremo should apologise to the agitating doctors for the alleged threats she issued to them.

Sen urged the chief minister to listen to the grievances of the junior doctors patiently. "Mamata Banerjee has done so much for Bengal, but I am sorry to say that I do not support the way she spoke to the doctors. She must have spoken to them humbly because threats do not get anything done. "There is no harm or no shame in saying sorry... That will not hamper her popularity," Sen told PTI.

The filmmaker appealed to Banerjee to talk to the junior doctors face-to-face and end the impasse. "The chief minister is the guardian of the state. She is not just the guardian of the patients waiting outside, but also of those young brilliant doctors who are working day in day out throughout the year. I think, all she needs to do is to sit and talk face-to-face with the protesters to solve the crisis," she said at the state-run Nil Ratan Sircar Medical College and Hospital, where an assault on two interns by the relatives of a patient sparked the protests by the doctors.

The Padma Shri awardee also maintained that the state government should look into the demand for adequate security by the doctors. "She (Banerjee) has to understand that she needs to listen to them rather than doing all the talking... There must be a two-way dialogue. She must understand that the junior doctors are hurt. "What they have asked is not much... The state government has the responsibility to look into the security of the doctors. If doctors need to think about their security, how will they work," Sen said.

Asked if she finds substance in Banerjee's claims that opposition parties were influencing the ongoing protest, Sen said, "I do not think the CM is totally wrong. I can understand that the opposition is trying to gain an advantage of the situation... They (Opposition) are trying to gain power here. But we will not allow that happen."

The filmmaker had extended her support to Banerjee during her call for a change in the state, in the final years of the Left Front rule. Sen, who visited the NRS Medical College and Hospital in the morning with actor Kaushik Sen and musician Debojyoti Mishra among others, said it was necessary to stand by the doctors in this hour of crisis. "I am a filmmaker. I have so much work at hand, but I felt it was my responsibility to stand by the doctors. My conscience directed me to stand by them. We need to understand they are doing a noble job," she added.

Doctors across the state have called for a strike in protest against the attack on two of their colleagues at NRS Medical College and Hospital in the city by family members of a patient, who died Monday night. One of them received serious head injuries and was currently recuperating at the Institute of Neurosciences here. Services have been affected over the past three days in emergency wards, outdoor facilities and pathological units of many state-run medical colleges and hospitals and a number of private medical facilities in the state, leaving patients in the lurch.

Banerjee, who visited the state-run SSKM Hospital on Thursday, warned the junior doctors of consequences if they do not rejoin work, but the defiant agitators have refused to abide by the order. They asserted that the protests would continue till their demands are fulfilled.