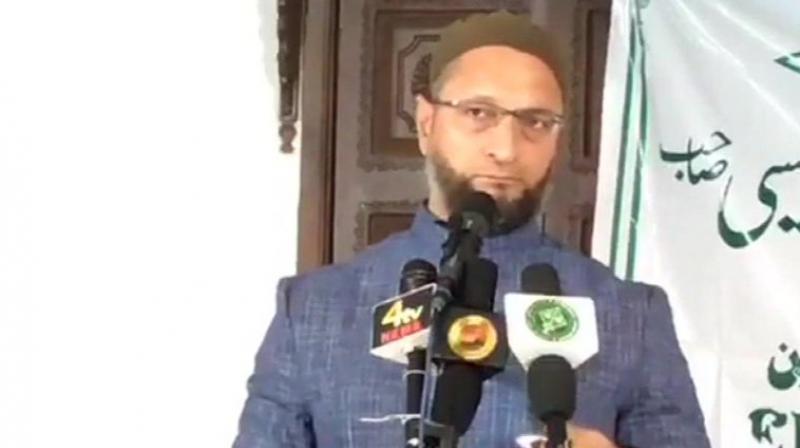 Syama Prasad Mookerjee was the founder of the Bharatiya Jana Sangh and also served as its first President and had died while being in detention in Kashmir. (Photo: ANI)

Hyderabad: Launching a scathing attack on Prime Minister Narendra Modi, AIMIM lawmaker Asaduddin Owaisi accused him of lacking political wisdom while claiming that the Central government led by him only 'loves Kashmir but not its people'.

Owaisi, who has been a critical opponent of Centre's decision to scrap Article 370 termed the step as a violation of the constitutional agreement and said, "Prime Minister Modi doesn't have political wisdom like Sardar Patel and Pandit Nehru had. When they took a decision on Kashmir, they did so in the interest of the nation. He is claiming that they are following Shyama Prasad, but they don't know he had acknowledged Article 370."

Syama Prasad Mookerjee was the founder of the Bharatiya Jana Sangh and also served as its first President and had died while being in detention in Kashmir.

All India Majlis-e-Ittehadul Muslimeen (AIMIM) parliamentarian from Hyderabad also raised questions over the state of Kashmir resident and said: "If they are all happy as being claimed by the government, then why are they locked inside houses and why are phone lines not working? I know this government loves Kashmir, but not Kashmiris. I know it has a love for the land but no love for those who live there. It loves power but not justice. They only want to retain power. But I shall remind that no one lives or rules for eternity."

Asserting that BJP has scrapped the Article 370 only because they have strength, Owaisi also claimed that it was inappropriate to present a 50-page bill within a day in the Parliament and expect everyone to read it.

"A Tamil Nadu actor (Rajinikanth) called PM Modi and Amit Shah "Krishna and Arjun" for abrogating Article 370 from Jammu and Kashmir. Then who are Pandavas and Kauravas in this situation? Do you want another 'Mahabharat' in the country", he said.

On August 11, speaking at a book launch event on the end of the two-year tenure of Vice President M Venkaiah Naidu, Rajinikanth had lauded Prime Minister Narendra Modi and Union Home Minister duo for the actions taken by them on the Kashmir issue while referring to them as "Krishna-Arjuna' combination.