Akhilesh Yadav was speaking at a press conference at the party headquarters when he was asked to comment on Gandhi's speech. 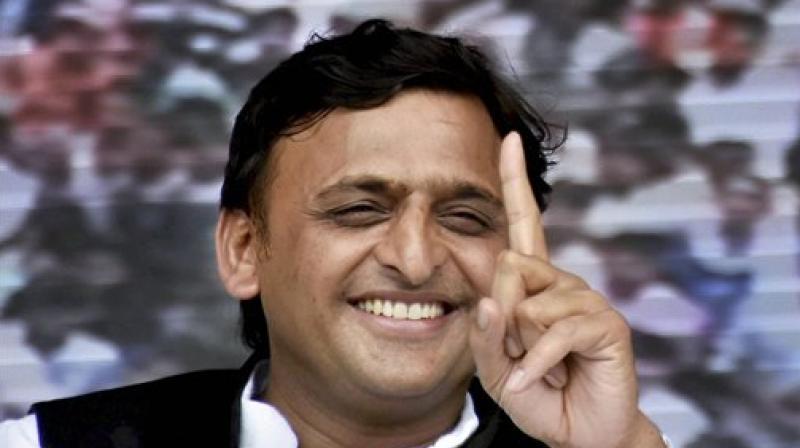 Replying to a question Akhilesh stressed that Rahul Gandhi is his friend and the friendship will continue. (Photo: PTI)

Lucknow: Samajwadi Party chief Akhilesh Yadav on Thursday defended Congress leader Rahul Gandhi for his remark that India was being run by dynasties, saying world history was replete with examples of people taking a plunge into politics due to their family background.

Yadav was speaking at a press conference at the party headquarters when he was asked to comment on Gandhi's speech. The Congress vice president had cited examples of the SP, the DMK and even Bollywood to buttress his point that several prominent Indians were born into famous families.

The Samajwadi Party is an alliance partner of the Congress and the two parties had contested the Assembly elections jointly. Yadav said across the world, there were a number of examples where people got the opportunity to come to politics due to their family.

"Whatever has been said for dynastic politics, the BJP is extremely worried. Rahul is my friend, whatever he said would have been in the context of UP and national politics," he said.

"Had he been asked about US politics, he would have mentioned that in America there was a president whose son also became a president. Then there was one president, whose wife also wanted to be a president. There are number of such examples in world democracy," he said.

History was replete with examples of people taking a plunge into politics due to their family background, he said.

Replying to a question Akhilesh stressed, "Rahul is my friend and the friendship will continue."

On Tuesday, addressing students at the University of California, Berkeley, Gandhi had said, "Most parties in India have that problem So...Mr Akhilesh Yadav is a dynast. Mr Stalin (son of M Karunanidhi in DMK) is a dynast...even Abhishek Bachchhan is a dynast." "So that's how India runs. So don't get after me because that's how India is run. By the way, last, I recall, Mr Ambanis are running the business. That's also going on in Infosys. So that's what happens in India," he had said.

Akhilesh, taking potshots at the BJP government in UP, alleged, "The budget has hampered development. No new project has been started in the past six months." The former chief minister challenged the present government to work better than him. On family feud and his equations with father Mulayam Singh Yadav and uncle Shivpal Yadav, Akhilesh ducked the question saying, "I will not say anything."

Referring to the launch of the bullet train project in Gujarat's Ahmedabad, he also hit out at the BJP on the allegations that were raised against him for launching schemes for Saifai (Etawah), his native place.

"They (BJP) used to say that I launch schemes for Saifai. I have relation with the place. But now they will not be able to say this," he said. When asked about reports of "meagre compensation" to farmers, he said, "Prime Minister Narendra Modi himself has promised entire loan waiver of farmers but it was not done." "CM (Adityanath) has approached the PM, the Niti Ayog, the finance minister and the RBI but with no help from anyone has waived loan (up to Rs one lakh) from his own resources. This is insufficient and farmers are disappointed," he claimed. "The expenses on advertisement, arrangement of loan waiver programmes etc would have been more than the loan disbursal," he claimed.