‘Martyr! We salute you’: Tempers flare at Assam teen who died in firing during CAB protests

A senior police officials said the incident is being investigated and the allegations of the family are being looked into. 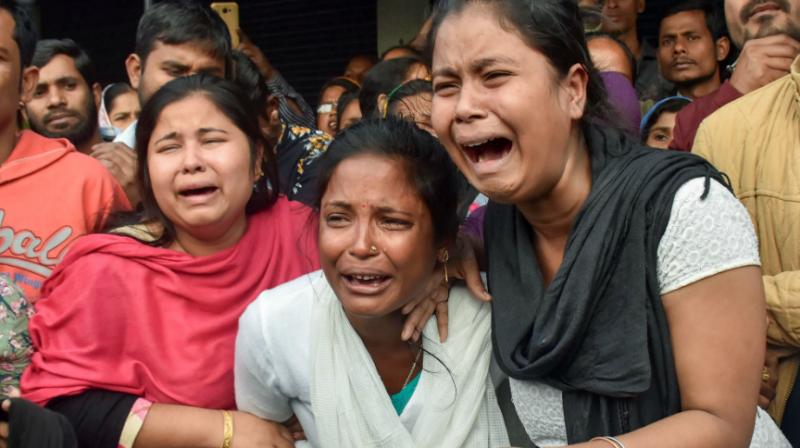 Sentiments against the amended Citizenship Act ran high on Friday at the burial of a 17-year-old youth who died in an alleged firing incident while he was returning from a protest venue, with many locals hailing him as a "martyr". (Photo: PTI)

Guwahati: Sentiments against the amended Citizenship Act ran high on Friday at the burial of a 17-year-old youth who died in an alleged firing incident while he was returning from a protest venue, with many locals hailing him as a "martyr".

Sam Stafford died Thursday night after sustaining a "bullet injury" at Namgarh area, a few kilometers from his home at Hatigaon, while he was returning from Latasil playground, where singer Zubeen Garg performed in solidarity with protestors against the Citizenship Amendment Act.

Family members alleged that he was grievously injured after some persons, who were in a four-wheeler, fired at a group of people in dark "late evening" at Namgarh.

A senior police officials said the incident is being investigated and the allegations of the family are being looked into.

"My son was a talented drummer and had gone to Latasil playground to listen to Zubeen as he was a big fan," Sam's 45-year-old father father Biju Stafford told PTI.

"He was returning home and was walking beside a group of anti-CAB (Citizenship Amendment Bill) protesters when the firing incident happened. The bullet hit him," he said.

The teenager was rushed to a hospital in Hatigaon by a few good samaritans and from there he was sent to the Guwahati Medical College and Hospital, where he died, his mother Mamoni Stafford (38) said.

She was inconsolable as her son's mortal remains were brought home on Friday. A sea of mourners poured at Staffords' humble abode to comfort the bereaved family and bid farewell to the "neighbourhood's lost musician son".

Sam's sister Mousumi Begum was in a state of shock. She was the first person in the family to learn about her brother's ill fate a day before.

"I called up Tutu (Sam's nickname) on his number. Someone else picked up the call who did not recognise me. I thought it was a cross connection so I disconnected. Sometime later, I called up again. And a doctor (at GMCH) picked up the phone and told me that my brother was in a critical condition and asked us to rush to the hospital," the wailing sister recalled as she held his portrait in her hands.

"Sam (a high schoolboy) was an innocent boy. He did not even fully understand the CAB issue. He had gone there just because he loved music. He just wanted to listen to Zubeen. Though we had advised him not to go as the situation was not good," she said.

Later, Assam Police personnel escorted a makeshift hearse van carrying his coffin to Christian Basti graveyard in Dispur. A traditional Gamocha was placed around his neck as his body lay in the coffin.

As the hearse left home, a friend held out Sam's portrait and cried, 'Joi Aai Asom' (hail Assam). A large number of neighbours had gathered on their rooftops and balconies, with some capturing the moment on their mobile phones as the van made its was forward.

"Along the way at Namgarh, people lit up candles in memory of my son," Biju said.

Two buses full of grieving family members and friends were also escorted to the cemetery, where scores of people from the neighbouring areas had also gathered to attend the rituals.

At the graveyard, it was a multi-faith gathering and some local artistes and activists of All Assam Students' Union (AASU) were also present.

Two people held out traditional Assamese Gamocha in the air bearing slogans. One was carried by a Hatigaon resident which said "No CAA", while another was held by a Christian Basti local which said "Shaheed Pranam Tomak. Martyr! We salute you"

"A local AASU leader made a speech in Assamese and urged people that no protests should be held after sunset as some anti-social elements are trying to give a bad colour to our movement," said Swapnav Jyoti Baishya Soud, a lawyer at Gauhati High Court.

The Assam Police, paramilitary personnel and state police's black panther commandos kept a tight vigil in the city which has been on the edge after the Citizenship Amendment Bill was passed by Parliament.

Garg, later in the day, also visited Staffords and met with the mother and other family members of Sam.

The singer, who has been vocally supportive of the protest, arrived at Hatigaon, in a special vehicle escorted by police as the situation here remained tense.

Sam's sister Mousumi said, "My brother was a budding drummer, always admired Jubin and it was heartening that the singer came to our home".