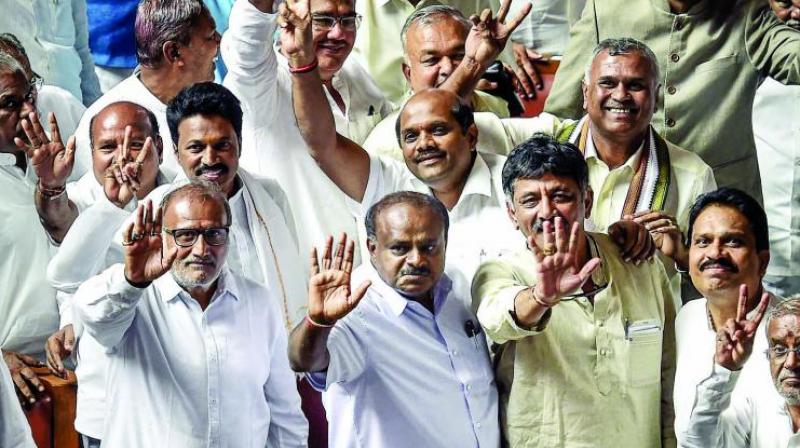 The development comes as the ruling coalition is accusing BJP of attempting to topple the government. (Photo: File)

Bengaluru: Two Independent lawmakers withdrew their support from the ruling Congress-JD(S) government in Karnataka on Tuesday. The development comes as the ruling coalition and opposition BJP are trading allegations of making a renewed bid to poach MLAs in a fresh political war just ahead of the Lok Sabha polls.

Independent MLAs, H Nagesh and R Shankar, submitted a letter to the Governor announcing the withdrawal of their support from the Kumaraswamy-led government.

H Nagesh, one of the lawmakers who withdrew support, accused the alliance of failing to provide “good and stable” government and announced that he would join the BJP.

Another lawmaker R Shankar said, “Today is Makar Sankranti. On this day we want a change in the government. The government should be efficient, so I am withdrawing my support (to the Karnataka government) today.”

Karnataka Chief Minister H D Kumaraswamy said that he is “totally relaxed” as he knows his strength. “If two MLAs withdraw their support, what will be the numbers? I'm totally relaxed. I know my strength. Whatever is going on in media in the past week, I am enjoying,’ he said.

His deputy G Parameshwara also maintained that the government is stable.

“We have been saying that BJP is luring our MLAs through money and power but their attempts to destabilise the government will fail. Our government is stable,” he said.

In the 224-member Karnataka Assembly, the ruling coalition has 118 lawmakers. With the defection of two MLAs, the number has come down to 116 – which is little above the halfway mark of 113.

Over the last two days, the Congress and the BJP are accusing each other of poaching their MLAs. The Congress sais several of its lawmakers are missing while the BJP has shifted its 104 MLAs out of Bengaluru all the way to Gurgaon near Delhi.