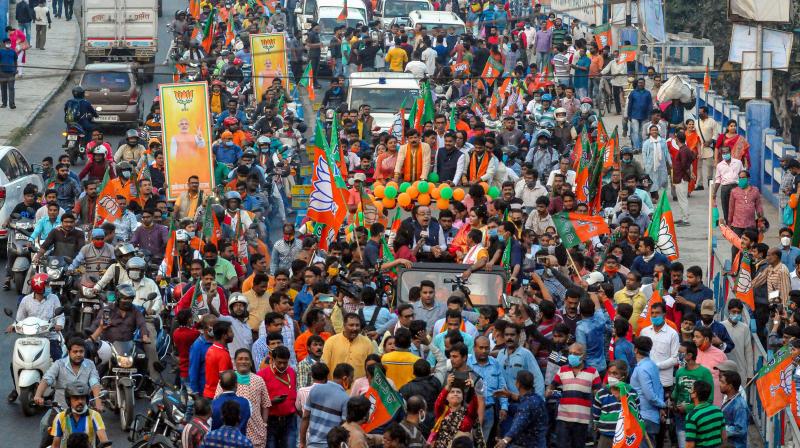 Kolkata: A fresh war of words erupted between the BJP and the Trinamool Congress on Thursday over their claims on the number of elected representatives who are eager to switch sides in the run-up to the assembly polls in West Bengal.

BJP national general secretary and its Bengal minder Kailash Vijayvargiya claimed in Indore that 41 MLAs of the TMC are in touch with the saffron party.

Reacting to it, the TMC asserted that seven BJP MPs of the state will join the party soon.

However, each party refused to attach much importance to the other's claim.

"I have a list of 41 MLAs who want to join the BJP. If I take these legislators in the BJP's fold, the Mamata government will fall. But we are looking at who should be admitted to the party and who should not be. We have decided that among these legislators, we will not take those whose image is not good," Vijayvargiya said at his hometown.

His comments come in the backdrop of the ongoing exodus from the TMC to the BJP.

"Seven BJP Lok Sabha MPs from Bengal are in touch with us. They will join us very soon," TMC spokesperson Kunal Ghosh said in Kolkata.

In the biggest exodus from the TMC in a single day, political heavyweight Suvendu Adhikari, along with 35 TMC leaders including five MLAs and an MP, switched over to the BJP in the presence of Home Minister Amit Shah last month.

After the 2019 Lok Sabha polls when the saffron camp bagged 18 seats, nine TMC MLAs and one each from the Congress and the CPI(M) switched over to the BJP. However, none of the MLA has resigned as legislators.