India   Politics  15 May 2019  Destroyed backbone of our economy: Rahul on demonetisation
India, Politics

Destroyed backbone of our economy: Rahul on demonetisation

Stressing on Nyunatam Aay Yojana (NYAY), he said, it will not only benefit 5 crore families but would also help the economy. 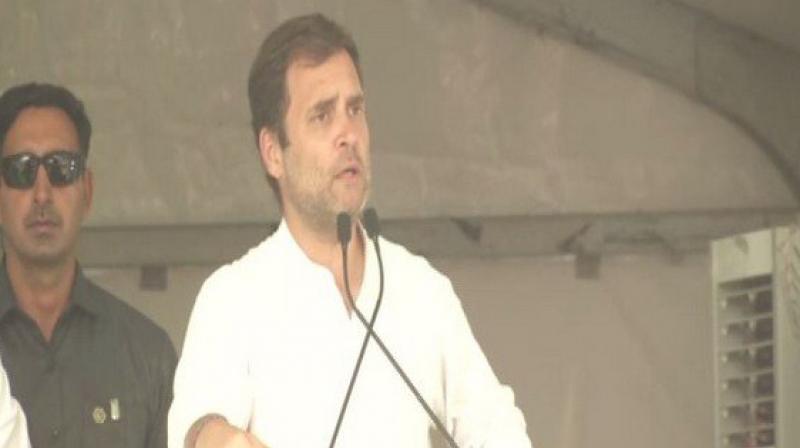 'Don't know what he had in dinner at around 8 pm that he took such decision which destroyed the backbone of our economy,' Rahul Gandhi said. (Photo: Twitter I ANI)

Ludhiana: Congress president Rahul Gandhi on Wednesday hit out at Prime Minister Narendra Modi for 'destroying the strength of Indian economy' and said without 'made in Ludhiana', India cannot challenge 'made in China'.

"Narendra Modi has destroyed the strength of the economy and the people with the implementation of demonetisation. But I want to tell you that without made in Ludhiana, India cannot challenge made in China," Gandhi said while addressing an election rally here.

"You have to understand how much the chowkidaar has looted you. Demonetisation was a financial madness of Prime Minister Modi. Don't know what he had in dinner at around 8 pm that he took such decision which destroyed the backbone of our economy," he said.

Gandhi scion called unemployment the biggest challenge faced by the youths today. "The biggest challenge today is unemployment, the second challenge is farmers poor condition. Who will create job opportunities? Without empowering micro small and medium enterprises (MSMEs), we cannot create job opportunities in the country. I guarantee you, whatever efforts are required to encourage MSMEs, we will surely do."

Stressing on Nyunatam Aay Yojana (NYAY), Gandhi said, it will not only benefit five crore families and 25 crore people but would also help the economy by boosting the business of small and medium traders.

"NYAY is not only for poor. It will mostly benefit middlemen and youths of Ludhiana. Narendra Modi took out the money from people's house and sent it to Anil Ambani. Therefore, you stopped buying products from the market, which caused a huge set back to small-scale industries," he said.

"Nyay will give you justice. Those who earn less than Rs 12,000 will be benefitted from Nyay. Nyay will help you in developing markets, which will boost both the demand and supply chain. PM Modi wants to close small scale industries and want only 15-20 rich people to run the economy of this country," he added.

Gandhi further promised a separate farm budget and filling of 22 lakh vacant posts in the government sector within a year if Congress comes at the Centre.

"Farmers asked us to present farmers' budget in Lok Sabha. We agreed to it. Two budget will be made in the Lok Sabha -- Kisan budget and the national budget. No farmers will be put behind the bars if failing to repay loans. We will also take immediate steps to quickly fill 22 lakh vacant posts in the government sector."

All the 13 Lok Sabha seats of Punjab will go to polls on May 19 in the seventh phase of general elections. The results will be announced on May 23.