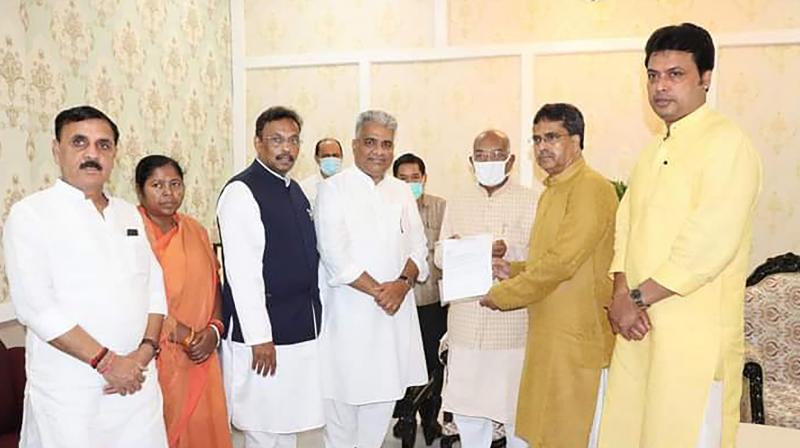 New Delhi: Biplab Kumar Deb, the first BJP chief minister of Tripura, on Saturday resigned from the post as the party’s central leadership decided to go in for a leadership change ahead of the 2023 assembly polls in the state. Within a few hours of Mr Deb’s resignation, the state legislature party elected the state unit chief Dr Manik Saha as Mr Deb’s successor.

The decision, according to the party sources, was taken as the BJP top brass had been receiving complaints of growing dissidence and the “working style” of the chief minister. Union minister Bhupendra Yadav and national general secretary Vinod Tawde were sent by the central leadership as observers to Agartala for the legislature party meeting.

Tripura became the fourth BJP-ruled state after Uttarakhand, Karnataka and Gujarat, where the top leadership decided to go in for a change of guard keeping in mind the party’s poll prospects. Assembly polls are scheduled for next year in the north-eastern state. The new CM is likely to take oath on Sunday.

In Tripura, where the incumbent BJP dislodged the CPI(M) government, which ruled the state for more than two decades, in 2018, is facing a challenge from Mamata Banerjee led Trinamool Congress, the Congress and the TIPRA, an outfit of indigenous community, led by Pradyot Kishore Manikya Debbrama who is a member of the state’s erstwhile royal family.

The opposition in the state has been slamming the ruling BJP over the “deteriorating law and order situation.” A section within the ruling BJP, sources said, had also been demanding a leadership change and had on numerous occasions reached out to the central leadership complaining about the “style of functioning” of the outgoing CM.

Amid growing dissidence and complaints against him from a section of the party leaders, Mr Deb met the BJP top brass, including the national president JP Nadda and Union home minister Amit Shah in the national capital on Thursday. Two days later, he submitted his resignation to Governor S.N. Arya.

"Congratulations and best wishes to @DrManikSaha2 ji on being elected as the legislature party leader. I believe under PM Shri @narendramodi Ji's vision and leadership Tripura will prosper," the outgoing CM tweeted.

The new CM, a dentist by profession, had won the lone Rajya Sabha seat from Tripura earlier this year. Dr Saha, who quit the Congress and joined the BJP in 2016, was made the party’s state president in 2020. He is also the president of the Tripura Cricket Association. Dr Saha taught at Tripura Medical College located at Hapania before he joined mainstream politics.