Priyanka Gandhi questions Yogi Adityanath on law and order, COVID situation in UP 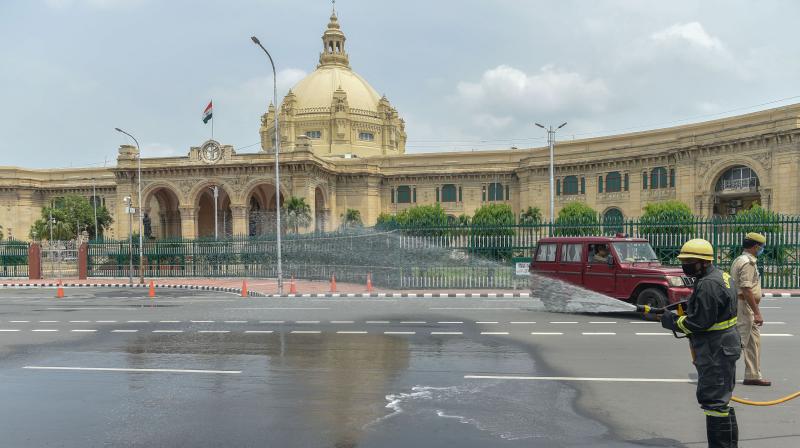 A firefighter sprays disinfectant in front of UP Vidhana Sabha in Uttar Pradesh. PTI photo

In a Facebook post, she said a young man was kidnapped by miscreants in Kanpur and his family was asked for a ransom for his release.

"The family collected Rs 30 lakh by selling their house and wedding jewellery. At the behest of the police, the family handed over the bag full of money to the kidnappers and the police could neither catch the miscreants, nor their son could be freed," Priyanka Gandhi said.

The family members of the kidnapped man are distraught, the Congress general secretary in-charge UP East added.

"This is a case from Kanpur where such a big incident had taken place a few days ago. Now you can imagine the state of law and order in UP from this," Priyanka Gandhi said, referring to the Vikas Dubey episode.

Dubey, a wanted criminal, was shot dead on Friday last by police, who claimed he was trying to flee after the car carrying him from Ujjain overturned on an isolated stretch of the highway on the outskirts of the city.

Dubey was wanted in connection with the ambush in Kanpur's Bikru village past midnight on July 2, killing eight policemen who had come to arrest him.

In a tweet, Priyanka Gandhi also attacked the Uttar Pradesh government over its handling of the coronavirus pandemic.

According to media reports, first it was stated that the report of a deceased person was negative for coronavirus and the body was handed over to the person's family. Then it was said the report was positive, but the ambulance came to take the body after 16 hours, Priyanka Gandhi said.

This happened in the home district of the CM in Gorakhpur, she said.

"Is this how the UP government is fighting coronavirus?" the Congress leader said.