I pleaded with CM for Marina burial: MK Stalin

The first delegation went and came back empty-handed. 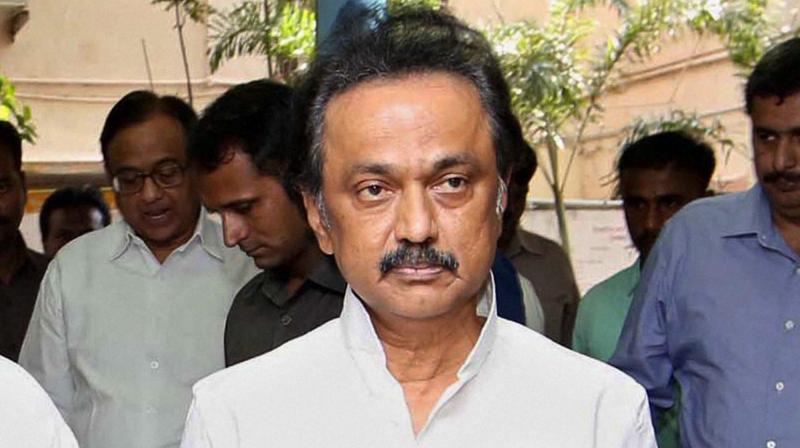 Chennai: “I feel no shame now in admitting that I pleaded repeatedly, even holding the hand of the chief minister, to give us the burial space at Marina. It was all for fulfilling our leader’s last wish, that he be laid to rest beside his mentor Anna. Despite all the pleading, they (CM) gave no commitment and finally, just to make us leave, told us, ‘We will see’.”

That was Mr M. K. Stalin opening up before the full-house gathering of DMK executives at the party headquarters on Tuesday to pass the condolence resolution for the late Mr Karunanidhi,  who passed away on August 7 and was laid to rest next to Anna’s memorial at the Marina the following day.

Mr Stalin recalled the harrowing time he, his family and the party seniors went through before the DMK’s battery of lawyers received the order from the Madras high court, directing the government to allow the Marina site for the burial. Mr Stalin said that when the doctors informed the family that all their attempts to save Mr Karunanidhi had failed and the final moments were closing in, it was decided that they should meet the CM personally to plead for the Marina burial site.

The first delegation went and came back empty-handed. Then some senior leaders suggested they meet the CM in person as they apparently believed he would relent if they met him. “I got ready to go, but senior leaders said I should not go because I am the son of Kalaignar and I am the party’s working president. I said I don’t care about my prestige, image or respect. I can lose anything for our leader,” he told the executive, his voice choking.

He said that when he, along with the DMK seniors, met the CM at his residence, he told them the site near the Anna memorial could not be given due to legal issues and that the legal opinion sought by the government too had confirmed that. “I told him we too were in government and we knew that legal opinion invariably reflected only the government’s thinking. ‘You should please grant this wish, I pleaded with the CM’,”
Mr Stalin said.